Winter Session of the Metropolitan Council of the OCA Held 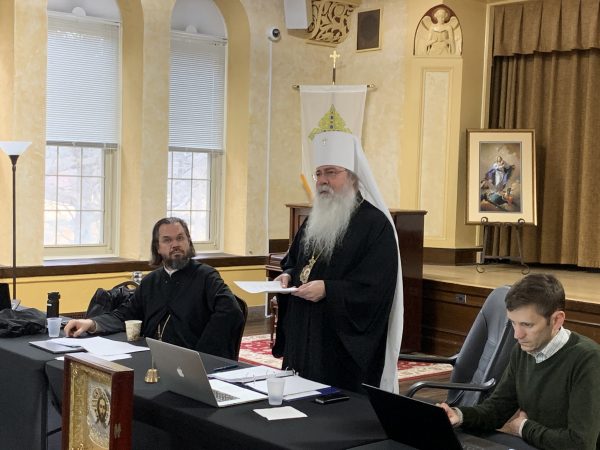 The Winter Session of the Metropolitan Council of the Orthodox Church in America took place Wednesday and Thursday, February 5 and 6, 2020 at the Seminary of the Immaculate Conception, Huntington, NY.

Metropolitan Tikhon opened the biannual meeting with his address to the council and began by noting with sorrow the recent falling asleep of Archpriest John Kuchta and Mr. Milos Konjevich. “Father John and Milos were excellent servants of Christ, offering their skills and talents to the Orthodox Church in America through their work on the Metropolitan Council and the Pension and Investment Committees, respectively,” noted Metropolitan Tikhon.

Metropolitan Tikhon then reported briefly on his domestic and international travels; in particular, he spoke about his annual trip to the Diocese of Mexico for the Feast of Theophany.  Metropolitan Tikhon noted that Archbishop Alejo has been instrumental in the spiritual and physical growth of the diocese, and suggested that the clergy, monastics, faithful, and especially the youth of the Diocese of Mexico would, “certainly benefit from better and more directed stewardship on the part of their brothers and sisters in the North”.

Metropolitan Tikhon then spoke about his work as the Locum Tenens of the Diocese of New England and the Albanian Archdiocese noting his intention to move steadily forward in filling those vacancies while at the same time allowing for both dioceses to have an appropriate period of mourning for the loss of their shepherd and father, Archbishop Nikon, and to allow some time for each diocese to undertake a self-assessment of their current status as they prepare for new leadership of the respective dioceses.

Metropolitan Tikhon concluded his report by noting that he had structured the agenda of the Winter Session in such a way so as to provide substantial time for constructive discussion on the results and suggestions of the youth report and the work of the Chancery Location Committee.

Following the report of Metropolitan Tikhon, members of the council received a progress report on the work of the Preconcilliar Commission for the upcoming 20th All American Council from Deacon Peter Ilchuk, Council-Manager. Deacon Peter presented the Council Theme, “Hope in an Age of Despair”, and a draft of the Council Logo, which will be presented to the Holy Synod for approval at their upcoming Spring Session. He also highlighted some initial plans about the council agenda which is still being developed by the Preconciliar Commission.