Source: OCA
Natalya Mihailova | 31 July 2015
Christ the Saviour Patriarchal Cathedral here was the site of the celebration marking the 1000th anniversary of the repose of Saint Vladimir of Kyiv, Equal to the Apostles, on Tuesday, July 28, 2015. 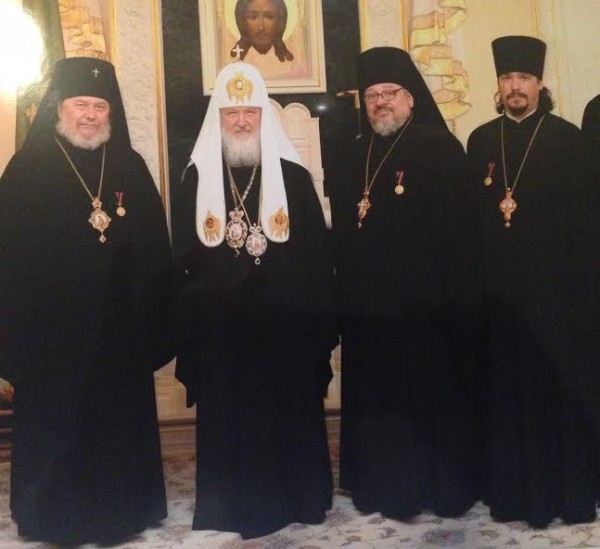 At the invitation of His Holiness, Patriarch Kirill of Moscow and All Rus’, representatives of the world’s Local Orthodox Churches concelebrated at the Divine Liturgy and participated in a variety of events marking the occasion.

Representing the Orthodox Church in America was His Eminence, Archbishop Irenee of Ottawa and Canada, who was accompanied by Archpriest Nazari Polataiko, Secretary of the OCA Archdiocese of Canada, and Deacon Nicolas Svetlovsky of Saint Seraphim Church, Rawdon, QC, Canada.

Two days earlier—on Sunday, July 26—Archbishop Irénée celebrated the Divine Liturgy at the OCA’s Representation Church of the Great Martyr Catherine, where he was warmly welcomed by Archimandrite Alexander, Dean and OCA Representative to the Russian Orthodox Church—and a “fellow Canadian.”  In the afternoon, the OCA and other delegations attended the official opening ceremonies at the city’s Tsaristyno Part and Estate, where they were greeted by Patriarch Kirill.  After participating in the blessing of a newly built chapel dedicated to Saint Vladimir, Moscow’s Mayor Sergei Sobyanin hosted a reception for the delegations in the historic Catherine’s Palace.

On Monday, July 27, Archbishop Irenee, Father Nazari and Deacon Nicolas venerated the relics of Saint Tikhon of Moscow, Enlightener of America, and Saint Matrona of Moscow at the Donskoy and Pokrovsky Monasteries respectively.  They then joined the delegations from the other Local Orthodox Churches at the Patriarch’s working residence, where Patriarch Kirill spoke of the anniversary’s significance.  In response, His Eminence, Metropolitan Apostolos, who headed the delegation from the Ecumenical Patriarchate, relayed official greetings from His All-Holiness, Ecumenical Patriarch Bartholomew of Constantinople.  At an official reception that evening, greetings on behalf of the Local Orthodox Churches were read, with Archbishop Irénée addressing Patriarch Kirill on behalf of His Beatitude, Metropolitan Tikhon.

Following the Divine Liturgy at Christ the Saviour Cathedral, the delegations attended an official reception hosted by the President of the Russian Federation, Vladimir Putin, in the Kremlin’s Saint George Reception Hall.