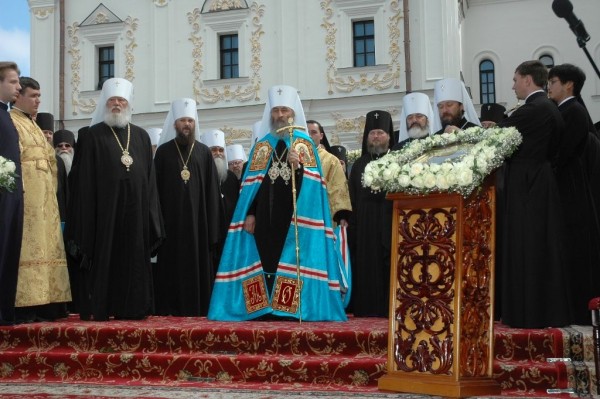 Metropolitan Onufry was elected to the See of Kyiv and All Ukraine at a special session of the Bishops’ Council convened at the Lavra of the Kyiv Caves on August 13. He succeeds His Beatitude, Metropolitan Volodymyr, who fell asleep in the Lord at the age of 78 on July 5, 2014 after a lengthy illness. [See related story.]

The Enthronement took place on the square in front of the Lavra’s Dormition Cathedral.

Also representing the OCA were Archimandrite Alexander [Pihach], Archpriests Wiaczeslaw Krawczuk and John Shimchick, and Protodeacon Nazari Polataiko. Representatives from the Churches of Constantinople, Alexandria, Jerusalem, Russia, Georgia, Serbia, Romania, Bulgaria, Poland, and the Czech Lands and Slovakia and the Russian Orthodox Church Outside of Russia also participated in the Enthronement Rites.

On behalf of the hierarchs, clergy and faithful of the Ukrainian Orthodox Church, His Eminence, Metropolitan Agafangel of Odessa and Izmail congratulated Metropolitan Onufry and presented him with the archpastoral staff. Greetings were then offered by representatives of the local Orthodox Churches.

After the reading of the greeting of Metropolitan Tikhon on behalf of the OCA—see text below—Metropolitan Onufry was presented with relics of Saints Herman, Tikhon, Innocent, Raphael and Alexis Toth, with which he blessed the thousands of hierarchs, clergy and faithful who gathered for the occasion.

In response, Metropolitan Onufry reflected on his 40 years of monastic life and the “responsible obedience to Mother Church” required of him as Primate.

On this day of your enthronement we join in prayer for your ministry as Primate of the Ukrainian Orthodox Church. You are called to serve as Metropolitan of Kyiv and All Ukraine at a difficult and dangerous time. Ukraine has experienced in its recent history turbulence and confrontation, political and social upheaval and uncertainty, violence and threats of violence. At the same time great effort is being made in Ukraine to build peace and stability.

The vocation of the Ukrainian Orthodox Church under your guidance is to contribute to peace and stability – peace and stability which will help all the people of Ukraine to live with respect and tolerance for each other. You have already shown your ability to collaborate with other religious communities of Ukraine, sharing with them a love for God, love for Ukraine, and a determination to build a peaceful society.

Today’s painful challenges are not the first difficulties Kyiv and Ukraine have faced. This land and its people have witnessed much suffering through history. There have been many challenges. In the 20th century alone, Ukraine had to bear wars and invasions, Communist and Nazi terror, famine and nuclear disaster. Yet today Ukraine is determined to continue the task of living as an independent European state, at peace internally and enjoying peaceful and productive relations with other nations near and far.

At your enthronement, Your Beatitude, the Orthodox Church in America is represented by two bishops – one American, and one Canadian. There are many Ukrainian Orthodox people in both countries. Some of them are members of the Orthodox Church in America, others are members of Ukrainian Orthodox dioceses and communities belonging canonically to the Patriarchate of Constantinople. Therefore, many Orthodox of America and Canada are in close kinship with Your Beatitude and with your Holy Church.

In America and Canada there is a great diversity of language, culture, and historical memory among Orthodox people. There are many whose historical origins are in Ukraine and Russia and Belarus, in Romania and Albania and Greece, in Serbia and Bulgaria and Poland, in the Czech Lands and Slovakia, in Syria and Lebanon and the whole Middle East. Many of our people – bishops, clergy, and lay people – are American and Canadian converts to the Orthodox faith. In Alaska, the Orthodox faithful are Native Americans, descendants of those who received the Orthodox faith and holy baptism from the missionaries sent to Alaska from Valaam Monastery in 1794. This diversity invites us in North America not only to acknowledge our differences but also to live in unity and mutual acceptance.

The River Dnieper at Kyiv is the place where the Baptism of Rus’ took place in 988, at the initiative of the Holy Prince Volodymyr. This baptism is the foundation of the Christian faith and the Orthodox Church in today’s Ukraine and Russia and Belarus. We pray that Your Beatitude, as the Metropolitan of Kyiv, will be granted the grace to affirm the unity of the Orthodox faith in Ukraine, to affirm the common Christian commitment in Ukraine to peace, and to affirm the interreligious commitment to work together for justice and peace in Ukraine. The foundation on which you stand as Metropolitan of Kyiv is strong – its cornerstone is Christ.

Your brother and concelebrant,