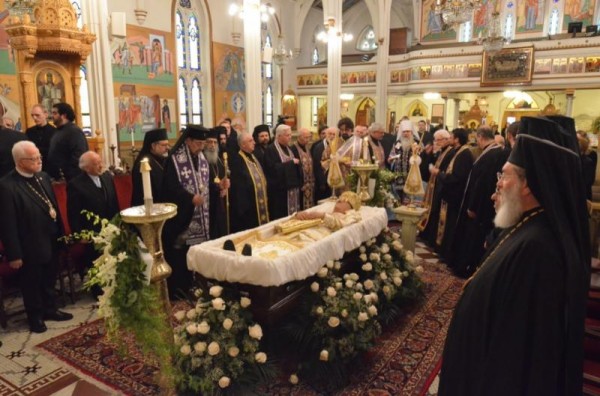 Responses were sung by students from Saint Vladimir’s Seminary, Crestwood, NY, of which Metropolitan Philip was a graduate and for which he served for many years as Vice President and Vice Chairman of its Board of Trustees. Many OCA clergy and faithful from throughout the New York area also were present to remember Metropolitan Philip in prayer.

“It was with profound sorrow that I learned of the passing of our brother, Metropolitan Philip, of blessed memory,” Metropolitan Tikhon said at the conclusion of the Panikhida. “His Eminence has carried out zealous service as the shepherd of the children of the Patriarchate of Antioch for over 40 years. The Church here in North America has lost an outstanding pastor and inspired visionary who made evangelization and Christian witness the cornerstone of his episcopal ministry.

“His tireless efforts to unite and build up the community of Antiochian Orthodox Christians, his sincere search for mutual understanding with other Christians, and his support of theological education on this continent have gained him well deserved respect in North America and throughout the world,” Metropolitan Tikhon continued. “He was a zealous advocate and participant in the Standing Conference of Orthodox Bishops in America and was hopeful that the work of the Assembly of Bishops could continue the work of fulfilling the mandate of the Chambésy process—‘the proclamation and promotion of the unity of the Orthodox Church, the common pastoral ministry of the Orthodox faithful in the region, as well as a common witness to the world.’”

Metropolitan Tikhon continued by stating that Metropolitan Philip “was always a visionary who looked to the future health and growth of the Church, as he said in his opening remarks at the First Assembly of Bishops gathering in 2010: ‘The Mother Churches must realize that Orthodoxy in America is the best gift to the world. And instead of being crushed by the burdens of the past, let us formulate a clear vision for the future.’ His Eminence even quoted the words of Thomas Jefferson: ‘I love the visions of the future rather than the dreams of the past.’

“Metropolitan Philip was a great friend to the Orthodox Church in America, her hierarchs, clergy and faithful,” Metropolitan Tikhon added. “We were bound by our common task to engage and evangelize North America, and we will all miss the energy and enthusiasm he brought to those sacred tasks.”

Metropolitan Tikhon offered a final person note. “I remember with great fondness my several visits to His Eminence, and particularly the hospitality and love with which he warmly received me, as he received all who came to see him. Our time together, his brotherly love and fatherly advice were a testimony to his love and respect for the Orthodox Church in America. May the All Merciful Lord give rest to the soul of His servant Metropolitan Philip, and may his memory be eternal!”

[A photo gallery of Friday’s Panikhida may be viewed on the OCA web site and Facebook page.]

On Sunday, March 30, Metropolitan Philip will lie in state in Saint Ignatius Church at Antiochian Village, Ligonier, PA. A vigil, during which the Gospels will be read with periodic Trisagion Prayers, will begin at 1:00 p.m. and continue until 11:00 a.m. on Monday, March 31, after which interment will take place.

May the memory of Metropolitan Philip be eternal!