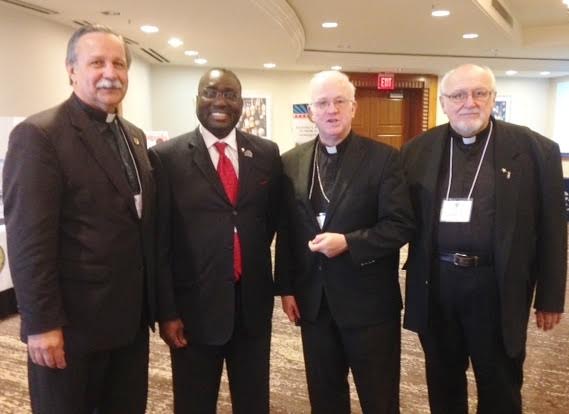 The gathering was held in part to celebrate the 70th anniversary of the VA Chaplaincy.

Father Theodore is the Director of the Orthodox Church in America’s Military and VA Chaplaincies, while Father Joseph serves as Chief of the VAMC Chaplain Office in Wilkes-Barre, PA.

The conference theme—“Providing for the Spiritual Care Needs of Our Nation’s Veterans and Their Families”—was developed in a series of training and breakout sessions conducted by chief and lead VAMC chaplains and endorsers and the director of the VA National Chaplain Center Office and associates.  Sessions included leadership training, patient-centered care and cultural transformation, the free exercise of religion in VA facilities, suicide awareness and prevention, conflict management, rural health and community clergy training, contemporary approaches to education and mental health, and a variety of related topics.

Chaplain Michael L. McCoy, Director of the National VA Chaplain Office, also addressed the gathering, as did Carolyn Clancy, MD, Deputy Under Secretary for Health for Organizational Excellence, who delivered the keynote address at the conference awards luncheon.  VA chaplains who died between January 2011 and June 2016 also were remembered during a special ceremony.

In related news, Father Theodore attended the graduation of Deacon Matthew Fuhrman from the Army Chaplain Basic Officer Leader Course at the US Army Chaplain Center and School, Fort Jackson, SC, on August 19, 2016.  A student at Saint Tikhon’s Seminary, South Canaan, PA, Deacon Matthew was commissioned as a 2LT in the Army Chaplain Candidate Program in 2014.  His wife, Matushka Jessica—a member of the OCA web site team—also was present at the ceremony, at which Chaplain (Brigadier General) Thomas L. Solhjem, US Army Deputy Chief of Chaplains, was guest speaker and Chaplain (Colonel) Peter R. Sniffen, Commandant of the US Army Chaplain Center and School, presented awards and diplomas.

For additional information about Army candidate programs or entering the US Armed Forces’ chaplaincy please contact Father Theodore at chaplains@oca.org.