Source: Voice of Russia
Natalya Mihailova | 05 May 2014
Odessa is morning the victims of Friday's violence and subsequent fire, in which at least 46 people died. The Ukrainian national flags and the flags of Odessa are flying at half-mast. Traffic is thin on the roads and there are few people in the streets, but the churches are packed with mourners. 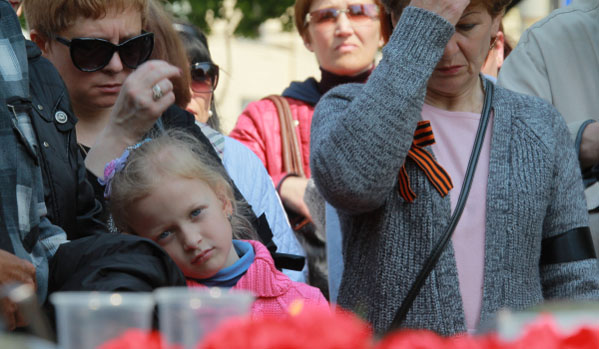 Residents have brought lots of flowers to the House of Trade Unions, where dozens of people were burnt alive on Friday evening.

In the square adjoining the building, policemen are watching order. They cordoned off the building with a ribbon.

Grecheskaya Street and Grechecskaya Square, the scene of Friday’s clashes, have been mostly cleaned up, upturned cobblestones and broken glass scattered over the place being the sole reminder of the tragedy.

No politically-motivated incidents were registered in the city during the night, Vladimir Shablienko, press secretary of the Odessa regional police department, told reporters.

The situation is on the whole calm, he said.