Official Statement of the Holy Synod of the Ukrainian Church Published

Source: Union of Orthodox Journalists
The Holy Synod noted the deterioration of the situation in world Orthodoxy and called a Pan-Orthodox Council discussion the only way out of the current crisis.
Yekaterina Filatova | 07 December 2019 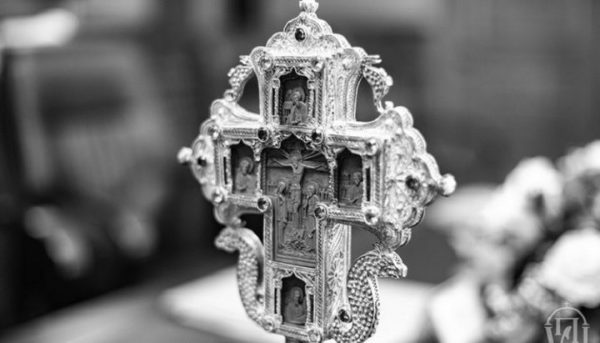 On December 6, 2019, the last session of the Holy Synod of the Ukrainian Orthodox Church took place in the residence of the Primate of the UOC in the territory of the Holy Dormition Kiev-Pechersk Lavra. Having discussed the latest developments in the sphere of inter-Orthodox relations, the Synod made an official statement, the text of which was published on the UOC DECR website.

In the Statement, the Synod of the UOC noted that the crisis resulting from the anti-canonical actions of the Patriarchate of Constantinople in Ukraine is not a problem of bilateral relations between the Patriarchates of Constantinople and Moscow and concerns all Local Orthodox Churches, as it “destroys the very foundations of the life and mission of the Church of Christ”.

In this regard, the Holy Synod welcomed the initiative of His Beatitude Patriarch Theophilos III of the Holy City of Jerusalem and All Palestine to convene a Pan-Orthodox Council in the Hashemite Kingdom of Jordan since it considers the Pan-Orthodox Council discussion to be the only way out of the current crisis.

The UOJ publishes the full text of the Statement of the Holy Synod of the UOC.

The Holy Synod of the Ukrainian Orthodox Church, after careful deliberation of the recent developments in the sphere of inter-Orthodox relations, makes the following statement:

1. We are compelled to declare that due to the anti-canonical actions of the Patriarchate of Constantinople in Ukraine, and also in connection with the actions perpetrated by the Primates of the Greek and Alexandrian Orthodox Churches, namely by their entering into Eucharistic communion with  the schismatic “Orthodox Church of Ukraine”, the situation in Orthodox Christianity  has  grown worse not only at the administrative but also at the spiritual level – that is, on the level of ecclesial communion in the Holy Sacraments.

2. It has become apparent that this crisis is not only a problem of bilateral relations between the Constantinopolitan and the Moscow Patriarchates, but it concerns the whole of World Orthodoxy, all the Local Orthodox Churches since it is harming the very foundations of the life and missiology of Christ’s Church.  This problem is not administrative but ecclesiological.  The new conception of the Patriarch of Constantinople as “the first without equals”(“Primus sine paribus”) has reared its head in world Orthodoxy, and is something which the Orthodox Church has never known previously , and which in actuality is a clear violation of the principle of the Church’s catholicity and a consequence of the misunderstanding of the nature of the Church in general and of the role of the individual Local Churches, in particular.  In addition, the Patriarchate of Constantinople began to concelebrate services with persons who were not canonically ordained, which in itself is a blasphemy and sacrilege with regards to the Eucharist.

3. In view of this, the cessation of  Eucharistic communion by the  Ukrainian Orthodox Church with the Patriarchate of Constantinople and with the Churches and hierarchs who have recognised  the schismatics is not an abuse of the Eucharist, or  blackmail of the Eucharist, as some people have alleged, but on the contrary it is a defense  of the Eucharist and a safeguard of the canonical and spiritual purity as well as the integrity of the Church.  After all, our Lord Jesus Christ, in the words of the Holy Apostle Paul, ”also loved the Church, and gave himself for it… That he might present it to himself a glorious Church, not having spot, or wrinkle, or any such thing; but that it should be holy and without blemish” (Ephesians. 5: 25-27).

4. For these reasons, it is false and manipulative to accuse the Ukrainian Orthodox Church of allegedly moving toward self-isolation, specifically by its suspension of Eucharistic communion with those who have themselves entered into communion with unrepentant schismatics.  In fact, we uphold the purity of the canonical traditions of the Church and protect the Church from blasphemy.  Otherwise, if persons who have no canonical ordination are admitted to the priesthood, and if the schism is recognised by the Church, but the true Church of Christ is ignored or falsely called the schism, then there is a danger that the true Church may be substituted.  Moreover, such anti-Church actions blur the line between the Church and the schism.  As a result, a so-called new “Church” structure is created, which is founded by men, in place of the true Church that was founded by our Lord Jesus Christ who “hath purchased [it] with His own blood“ (see Acts 20:28).

5. One of the basic principles of Canon law of the Orthodox Church is such that whoever enters into Eucharistic communion with the excommunicated will be excluded from communion with the Church himself.  In this regard, the  entering into communion  by certain Local Churches with persons who have fallen into schism in other Local Churches and who have not truly repented and who are not canonically ordained, automatically raises the question of whether their continued  Eucharistic  communion with these schismatics also makes them  complicit in this sin, and which, in fact, also causes them to be in violation of the above-mentioned canonical principle?

6. We believe that the only way out of this crisis is to have a Pan-Orthodox Council discussion and find a solution to the whole range of these problematic issues.  Recognising all the inherent difficulties involved in convening such a Pan-Orthodox meeting, we still have yet to see another way out of the crisis.  Therefore, we welcome the initiative of His Beatitude Patriarch Theophilos III of the Holy City of Jerusalem and of All Palestine to convene a Pan-Orthodox Council in the Hashemite Kingdom of Jordan.  During the many difficult times in the history of our Church, there was already such a case where the Patriarchate of Jerusalem provided assistance. This was in 1620 A.D.  when His Holiness Patriarch Theophanes III of Jerusalem restored the Orthodox hierarchy in Kyiv in order to replace those who had joined the Union under the pressure of the then Polish-Lithuanian authorities.  We applaud, thank, and look forward to similar calls for a Pan-Orthodox meeting from the Primates and hierarchs of the other Local Orthodox Churches which, in fact, has already started to happen more and more frequently of late.

7. It is to be noted that geopolitical and political factors have, unfortunately, started to blatantly interfere in the internal life of World Orthodoxy in unprecedented fashion.  As a result, individual Local Churches have been making Church decisions under the influence of these factors, contrary to Church canons and centuries-old traditions of the Church.  We understand that each Local Orthodox Church does its ministry within a particular state, and sometimes several or many states.  Often, one or another Orthodox nation is historically very closely connected to both its own state and its Local Church.  However, it is our deep conviction, that every Local Church in its service to God must be above national, state, or political boundaries and interests, and not be subjected to external pressure, remembering that the Kingdom of God we preach of is not of this world.  (see John 18:36).  If each Local Orthodox Church associates itself solely with the interests of its own state, then world Orthodoxy cannot be united, since it is well known that states engage in conflict or in wars with each other, but the Church must always preserve unity and reconcile people, whilst not becoming a party or a means of confrontation.  We express our hope that the Holy Orthodox Church, with the help of God, will find the strength to overcome these challenges and maintain its unity;  rising above national borders and interests, because in Christ there is neither “Greek nor Jew…, Barbarian, Scythian,… but Christ is all, and in all”(Col. 3:11).

8. We appeal to the archpastors, pastors, monks, and laity of our beloved Ukrainian Orthodox Church.  Dear Vladykas, Fathers, brothers and sisters!  It is not without Divine Providence that we here in Ukraine and within our Church, and within the bounds of World Orthodoxy, that the boundary line between the true Church and the schism lies today.  In this situation, we must preserve the purity of the canonical system and the teaching of the Church. Opponents are trying to scare us with the prospect of self-isolation.  But as long as we continue to live in true faith, there cannot be any self-isolation. The blessed memory of His Beatitude Metropolitan Volodymyr of Kyiv and All Ukraine reminds us that “there can be no self-isolation with Christ”.  In fact, our Ukrainian Orthodox Church today, through its various trials and tribulations, is upholding the unity of the whole Orthodox world.  Don’t be afraid!  You are part of the one true Church!  Love the Church, keep the Church and yourself in it, because through it the Lord saves us.  And leave the rest to the Will of God.  Remember, it is not Man who directs the Church, but our heavenly Father Himself.  Let us pray that the Lord through his Holy Spirit will correct all human error, purify us from all evil things, and save our souls!