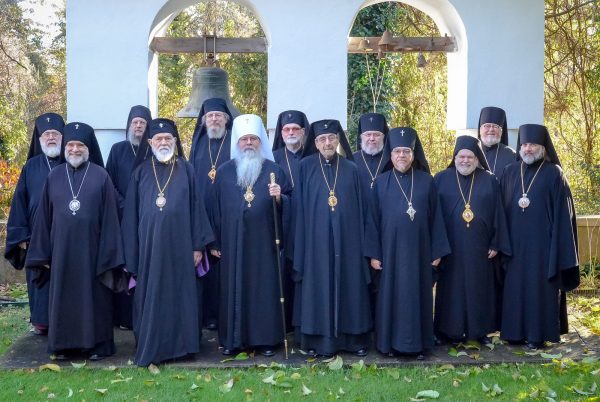 On Monday, January 28, 2019, His Beatitude, Metropolitan Tikhon and the members of the Holy Synod of Bishops of the Orthodox Church in America issued an Archpastoral Letterconcerning the situation of the Church in Ukraine and related matters, as decided during the Fall Session of the Holy Synod held October 23-25, 2018.

The complete text appears below and is also available in PDF format.

Archpastoral Letter of the Holy Synod of Bishops of the Orthodox Church in America
Concerning the Situation of the Church in Ukraine
January 28, 2019
01/013

To the Clergy, Monastics, and Faithful of the Orthodox Church in America,

The Holy Synod of Bishops addresses this archpastoral letter to our flock to provide guidance with respect to current events in world Orthodoxy that may be occasioning questions, confusion, or even scandal within our communities in North America.  The immediate cause of these questions, confusion, and scandal are found in the recent developments that have taken place in Ukraine. A broader cause of confusion and misunderstanding may also be found in the underlying disagreements about ecclesiology, territorial jurisdiction, and canonical principles, which continue to erupt not only with reference to Ukraine but also to other geographic areas.

In writing this archpastoral letter we do not presume to resolve either the direct or the wide-ranging reasons for these crises, because such resolution must come from the conciliar and synodal process present in the Church’s tradition, a process that, in the face of the Ukrainian situation, has been advocated by others throughout the Orthodox Church and which our Holy Synod wholeheartedly endorses. Rather, the purpose of this letter is to provide our clergy and faithful with some direction and perspective in dealing with the impact that these global issues are having on our local communities in North America. We will, of course, be grateful and humbled if our words of guidance contribute to the global discussion of these matters.

Any such contribution can only arise from our own experience as the Orthodox Church in America. We remind our faithful that the resolution of the canonical anomalies in our lands has been and remains a difficult and ongoing task. While this task is not an end in itself, overcoming these anomalies will serve to maintain our full unity and communion with Orthodox Christians throughout the world. Although the Tomos of autocephaly was indeed given to our Church as a means of suppressing scandalous ecclesiastical divisions, it was also given as a means to build a peaceful and creative church life with other Orthodox Churches in North America.  The gift of autocephaly was not a declaration of independence, an expression of nationalism, or an excuse for isolationism but rather a call to the fulfillment of the apostolic, missionary, and pastoral work of the Gospel.

As we consider the difficult challenges the universal Church is facing, let us be heartened by God’s blessings on our own humble efforts towards the establishment of unity in North America. Let us be mindful that the canonical tradition of Holy Orthodoxy is not a weapon to be wielded for conquest but a remedy to be applied for the healing of human souls. Let us remember that the resolution of questions of ecclesiastical jurisdiction, both in North America and throughout the world, should not be adjudicated in the realm of legal disputes or resolved through governmental interference but in the spirit of humility and meekness offered by our Lord Jesus Christ. If the present complications seem irresolvable, let us remember that “the things which are impossible with men are possible with God” (Luke 18:27).

The ecclesiastical situation in Ukraine has already been addressed by His Beatitude, Metropolitan Tikhon in his letter of September 26, 2018. Since that time, further developments have occurred, most notably the full breaking of communion by the Patriarchate of Moscow with the Ecumenical Patriarch, the creation by the Patriarchate of Constantinople of an ecclesial body consisting of two schismatic groups, the convening of a “Unification Council” which recognized these groups as a new and unique body and which also elected for it a Metropolitan for Kyiv, and, most recently, the proclamation of a form of autocephaly for this new body by the Patriarchate of Constantinople.

We, the members of the Holy Synod of Bishops of the Orthodox Church in America express our deep sorrow and distress over these developments and, in particular, by the rupture in communion between the Church of Moscow and the Church of Constantinople.  It is our sincere hope and fervent prayer that a way forward be found for restoration of communion that is in accord with both the Gospel of our Lord Jesus Christ and the Sacred Canons of the Church established by the Fathers which have protected and promoted the unity of the Church through the centuries.

In light of the above new developments, by means of this pastoral letter, we re-affirm the substance and content of His Beatitude, Metropolitan Tikhon’s letter. To demonstrate our commitment to upholding unity in the Church, we express our desire and intention to maintain full communion with all the universally recognized autocephalous Orthodox Churches. We exhort our clergy and faithful to fervently offer prayers that the unity and communion of Orthodox Christians in Ukraine be restored and that all schisms be resolved according to the canonical tradition and discipline of the Church.  We also remind our clergy and faithful that it is the people of Ukraine, our brethren in Christ, who are suffering from the effects of the broader ecclesial conflicts and it is for them, in particular that we shall offer prayers.

We furthermore exhort our clergy and faithful to offer fervent prayers so that unity and communion be maintained within the fullness of the Orthodox Church throughout the world.  Recalling the words of Saint Cyprian of Carthage “… and this unity we ought firmly to hold and assert, especially those of us that are bishops who preside in the Church, that we may also prove the episcopate to be one and undivided,” it is our earnest hope that a conciliar process be initiated by His All-Holiness, Ecumenical Patriarch Bartholomew in union with his brothers, the Primates of the Churches. Thus, a Church-wide discussion of primacy and synodality can be undertaken outside of the context of this specific ecclesiastical dispute. With respect to the Church in Ukraine, the Holy Synod of Bishops has determined at this time:

As a final exhortation, we faithfully receive the patristic word, “Do not let schisms loose among the Churches.” But even more, we willingly accept and endorse this admonishment, because we follow the Fathers of the Church who have called us to unity with those who hold identical doctrines with us. We jealously guard this unity with all who confess the Orthodox Faith. Nothing can be more pleasing to the Lord who yearned for the unity of His disciples than to behold His faithful people, separated from one another by so vast a diversity of places, history, cultures, and languages, yet bound by the unity of love in the One Body of Christ.

As the pastors entrusted with the flock of the Orthodox Church in America, we cannot stand by idly and allow the Orthodox faithful to be divided into factions. Let us all zealously endeavor to count all things secondary to the unity to which we are called, and above all, let us all be solicitous for the unity of Christ’s Holy Orthodox Church in America and throughout the world, lest, becoming divided, she become weakened in her task of proclaiming the Gospel to the ends of the universe.  As the Lord prays in John 17:19-21, “I do not pray for these alone, but also for those who will believe in Me through their word; that they all may be one, as You, Father, are in Me, and I in You; that they also may be one in Us, that the world may believe that You sent Me,” so likewise do we pray.

Given on this day, January 28, 2019 by the Holy Synod of Bishops of the Orthodox Church in America,