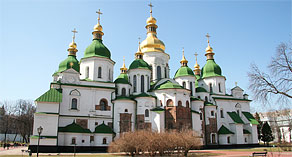 Moscow, February 26, Interfax – Icons of the 15-17th centuries from the collection of Andrey Rublev Museum that were exposed at the exhibition in the Sophia of Kiev national reserve will come back to Moscow on Wednesday.

“The flight is planned for Wednesday, February 26,” director of Andrey Rublev Museum Gennady Popov was quoted as saying by the Vecherniaya Moskva daily on Wednesday.

He urged not to spread panic.

“It is absolutely normal to take icons from unfavorable surrounding. Icons should be packed carefully. Chief keeper and restorer from the Rublev Museum are there. The only thing we did is that we closed the exhibition earlier,” Popov said.

Head of the Rossotrudnichestvo in Ukraine Konstantin Vorobyev said that icons were insured for a million euro.

“But this case is not about money. Today officials of the Russian Embassy in Ukraine and our Russian Center of Science and Culture in Kiev, Russian and Ukrainian museum workers spare no effort to deliver national treasure safely back to Russia,” he said.