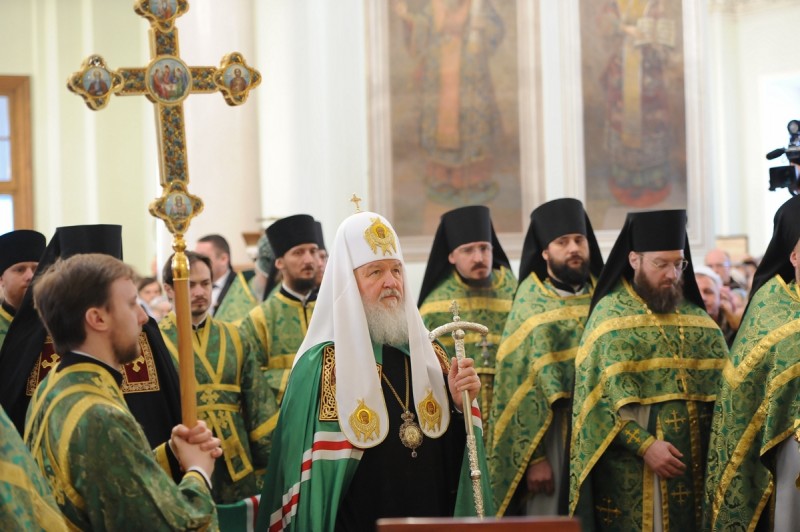 On the Sunday of Forgiveness and the commemoration day of St. Daniel of Moscow, March 17, 2013, His Holiness Patriarch Kirill of Moscow and All Russia, celebrated the Divine Liturgy in the Cathedral of the Trinity at the St. Daniel Monastery in Moscow.

During the liturgy, Archimandrite Isidore (Tupikin) was consecrated as bishop of Smolensk and Vyazma.

His Holiness was assisted by a great assembly of hierarchs, brethren of the monastery in holy orders and Moscow clergy. Among the worshippers were Smolensk Governor A. Ostrovsky, State Duma’s Committee for Parliamentary Regulations and Organization chairman A. Popov, Deputy Minister for Culture G. Ivliev, as well as officials from Smolensk and a delegation of clergy and monastics from the diocese of Smolensk.

During the liturgy His Holiness ordained Hieromonk Nikon (Kashirin) as priest.

After the liturgy, Patriarch Kirill addressed Bishop Isidore of Smolensk and Vyazma with words of encouragement and presented him with a bishop’s crosier. According to tradition, the newly consecrated bishop gave the faithful his first archpastoral benediction.

Then the Primate of the Russian Church led the congregation in thanksgiving to St. Daniel of Moscow at the shrine with his relics.

Archimandrite Aleksiy (Polikarpov) greeted His Holiness on behalf of the monastic community and presented him with an icon of the Saviour Not-Made-With-Hands.

His Holiness Kirill addressed himself to the congregation with a primatial homily.

In recognition of his pastoral efforts for the good of the Holy Church and on the occasion of his 65th birthday, Patriarch Kirill awarded Archimandrite Aleksiy, the abbot of the St. Daniel Monastery, with the Order of St. Sergius of Radonezh.