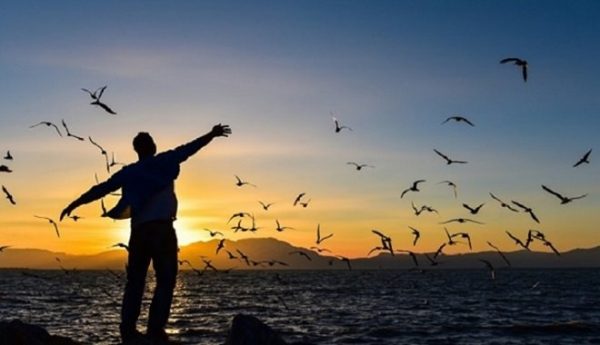 ‘Lord, I am not worthy that you should come under my roof’.

Self-esteem or self-knowledge? These are two states of human existence which these days are attracting the interest of many people. When the level of self-esteem, that is belief in ourself and our abilities, is low, then we feel guilt, it’s difficult for us to take initiatives, our mood is despondent and we make choices in our personal relationships, as well as our professional expectations and activities which are often catastrophic or belittling for us. On the other hand, if people seek self-knowledge, they’re open to the dangers of either overestimating themselves or of banking only on their positive aspects, while, as regards their negative qualities they may well choose the road of ‘we’ll see to it later’, or ‘if people don’t like it…’. It’s not often you come across people who are balanced, who don’t reject themselves, despite whatever weaknesses they may have, or who don’t overestimate any good qualities they may have, which results in arrogance and pride.

In contrast to this view of the world, faith proposes a balanced approach, which springs from our relationship with Christ. Our self, our existence, is of value because it’s an image of God, which was made by him from the beginning and then re-made with the incarnation of Christ. This is because God recognizes a unique value in us humans, since he loves us personally and particularly. Our worth isn’t dependent on our moral value, on whether we sin or not, whether we err or whether we observe God’s commandments. It doesn’t even depend on whether we believe in God. The sun rises on both the righteous and on the unrighteous, on believers and unbelievers. Salvation from death is offered to everyone, without exception, even to those who for a variety of reasons aren’t Christian (for example, being born or being about to be born in countries where people believed or believe in other gods). They still have hope in salvation, because they have within themselves the gift of the conscience and the law of love. So self-estimation isn’t exclusively self-defined, but comes as a benefit of faith in God.

Moreover, there isn’t anyone without talents, without their gifts. What we mustn’t do is compare ourselves and any talents we may have with others and their gifts. Everybody’s unique and different, in one way or another. This attitude stops us from envying others, as well as from underestimating ourselves, that is, having low self-esteem.

Besides, even if our family and friends, the people we associate with, don’t really accept us and our abilities, don’t give us  the love we want and could have, there’s still the possibility to overcome this. You yourself can love, even if they deny you their love. It may seem difficult. But if you want to have any sort of genuine identity, if you want to fight for your own personal freedom, you have to defeat the opposing bad thoughts, you have to resist a – frankly- demonic, self-induced feeling of isolation and self-pity.

This is where the second part of the balance of faith comes in. Self-knowledge isn’t a basis either for us to take pride in or to despair of ourselves. It’s the basis of humility. We see this in the dialogue that took place in Capernaum between Christ and a Roman centurion whose servant was bed-ridden and paralyzed. The pagan said to Christ that he didn’t feel worthy to receive the Lord in his home and asked him to perform the miracle from afar. The man was aware that he couldn’t compare to God. He knew that the authority he himself possessed couldn’t overcome death. He knew that, however much he loved, time and decay pay no heed to human feelings. His self-knowledge involved recognition of his limitations. And then no secular, political or social office could bring him to the point of overstepping his abilities or making him feel a ‘god’. So he fell at the feet of the one God and placed his humble hope in him. He didn’t forget who he was. He’d learned from his servant’s illness how far he could go. He accepted his limits. And he sought the solution from him who loves without limit.

In a world where the self is deified, a world of pride and depression- two sides of the same coin- a world where people have to be capable of anything and everything and where this has to be recognized or else they destroy or are destroyed, the Church shows us the image of God as the basis of genuine self-esteem; and humility as the foundation of true self-knowledge. Do what you can. Leave the last word to God. Don’t despair. Don’t be proud. When we seek Christ, we are healed existentially, overcoming death and experiencing the miracle of love.