Self-Knowledge as a Path to God: On Sts. Sergius and Herman of Valaam

His Holiness, Patriarch Kirill of Moscow and All Russia, delivered the following sermon during the Divine Liturgy at Valaam Monastery’s Transfiguration Cathedral on July 11, 2011, at which Archimandrite Savva (Mikheev) was consecrated Bishop of Voskresensk. 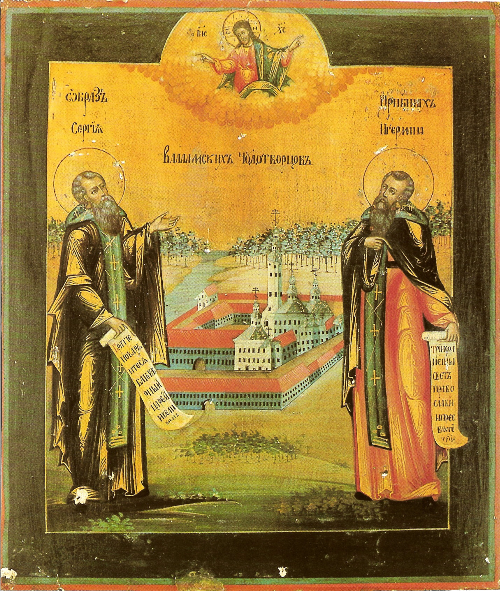 Today we celebrate the memory of the Holy Venerable Fathers Sergius and Herman, the great God-pleasers who came here in times of great difficulty for Rus’, when a formidable enemy had begun to ravage the south. With the once-flourishing centers of Russian Orthodoxy falling into ruin under this onerous occupation, the fact that the spiritual center began to move from the south to the north was of providential significance. Those who founded the monastery here did not face any external enemies, but they did face enormous difficulties in establishing the monastic life. The severe climate, the isolation, and the pagan surroundings all created practically insurmountable obstacles to spreading the word of God. The labors of the Holy Venerable Fathers Sergius and Herman were also overshadowed by the fact that Swedish missionaries had preached in these parts several decades before their arrival. They sought to convert the local pagan Karelians to Christianity, not hesitating to use military force to this end. The freedom-loving and peaceful Karelian people were so repulsed by this preaching of Christ that it seemed impossible to undo their firm rejection of the new faith.

But little by little, through their personal labors – and, above all, because the monastery founded by Sts. Sergius and Herman had become a beacon to the world – everything changed. The local inhabitants, stern and suspicious of the preaching of the new faith, poured into the monastery. Valaam became a missionary center for the enlightenment of the north of historical Rus’ with Orthodoxy.

Why did it come about this way? Was it a coincidence? Or was it because of the tactical mistake of the Western missionaries, who imagined they could convert people to Christ more quickly with the use of force? The fact of the matter is what I have just now said to the newly appointed bishop. The “word” of anyone taking upon himself the boldness to preach to others must come through the heart. It cannot be empty. No matter how beautiful, artistic, or expressive it may be, if it is soulless and not reinforced by one’s life, it turns into what the Apostle calls sounding brass, or a tinkling cymbal (1 Corinthians 13:1).

Our monastic fathers had both the power of the word and the power of love. Moreover, they engaged in ascetic struggle and were an example in real life. It is no accident that people went into the wilderness, away from the noise and bustle of everyday life. After all, this is not just some peculiarity of human behavior, but a genuine need. This need still exists today, when pilgrims from our noisy cities and metropolises flock here, to Valaam and to other monasteries, to spend at least some time in prayer, in solitude with God, and in beautiful nature. This desire is no accident, since the primary – and, perhaps, most important – step on the path to God is self-knowledge.

The Holy Fathers therefore eagerly went out to the wilderness, to mountains, and into caves, renouncing the world, the minimum of human comfort, and their family and friends – all in order to find a place where they could delve within and see the image of God there, as well as that of the devil. For the battle between the devil and God takes place in the human heart. How can someone incapable of keeping watch over his inner life distinguish one from the other? How can he not mistake the devil for an angel of light (cf. 2 Corinthians 11:14), when we call it education, upbringing, the influence of contemporary culture, and a certain “progressiveness” and lack of inhibition? How many words we have thought up to explain away and justify the devil that lives in our hearts! But if we look deep down within ourselves with our mind’s eye, we will see that it is neither contemporary culture, nor education, nor our way of life that is responsible – but the same ancient, timeworn temptations by which the enemy of the human race has always penetrated into people’s hearts.

To contemplate sin and holiness, the image of God and the temptations of the devil, one has to delve within. Thus, monasteries should be places where people can do so. Of course, this concerns monastics first of all. Through this inner work, a gradual overcoming of temptations and allurements, as well as growth in the spiritual life, comes about. Then people who come to the monastery and similarly delve into the quiet of a solitary place, can find yet another opportunity: to discover for themselves, through fellowship with people who have attained profound spiritual experience, that which was difficult to attain elsewhere.

St. John Chrysostom says that attachment to the mundane, to the bustle of life, prevents us from seeing and knowing ourselves. But, on the other hand, he also says that this bustle itself comes from people not knowing themselves. Know yourself! Discern God and the devil in your soul! Give battle to evil! Open your heart to good, know yourself, and then no amount of bustle – even in the most difficult place in the world, where passion and vice rage, where people are darkened in mind – can separate you from seeing within yourself the root and cause of sickness and suffering, as well as that of joy and peace. 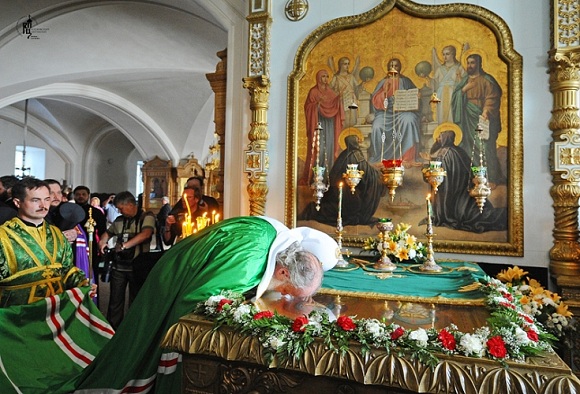 His Holiness venerating the relics of Sts. Sergius and Herman

May the Lord help this monastery – and you, Vladyka Abbot, brethren, and pilgrims – when coming into contact with this holy place to acquire the habit of self-knowledge and of a deep analysis of your spiritual life, while simultaneously acquiring the habit of love, good deeds, and holiness. We believe that it is no accident that our monasteries, having risen from ashes following the terrible years of persecution, now shine forth with their gilded domes. This is because our people, and our contemporaries in general, need monasteries. May God grant that everyone living in this monastery, who labors and prays here, might recognize his great responsibility before God for himself and for the world, which by coming into contact with holy places will be able to start out on the path of self-knowledge – and thereby on the path of acquiring the gifts of the Holy Spirit! Amen.