On Ss Peter And Paul Day, Metropolitan Hilarion celebrates Divine Liturgy at Moscow representation of the Church of Serbia

Source: DECR
Natalya Mihailova | 13 July 2015
On July 12, 2015, the Day of Ss Peter and Paul, Metropolitan Hilarion of Volokolamsk, head of the Moscow Patriarchate department for external church relations (DECR), celebrated the Divine Liturgy in the Ss Peter and Paul Church-on-the Yauza at the Moscow representation of the Church of Serbia. 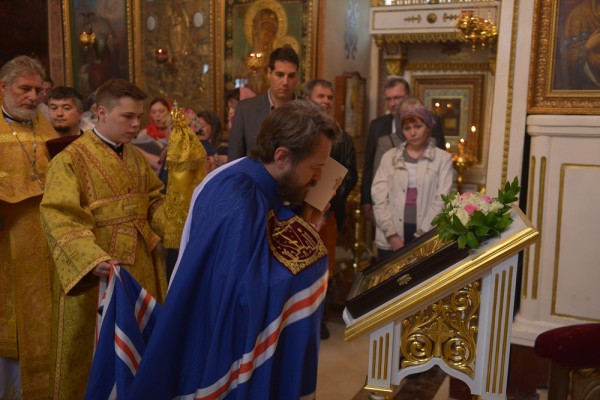 After the Prayer of Fervent Supplication, Metropolitan Hilarion lifted up a prayer for peace in Ukraine.

In his response, Metropolitan Hilarion greeted the congregation on the occasion of the commemoration day of their parish’s heavenly patrons, Ss Peter and Paul, and conveyed to them a blessing from His Holiness Patriarch Kirill of Moscow and All Russia. “The age-old relationships between our Churches continue today in our close cooperation in the inter-Orthodox field including the preparations of a Pan-Orthodox Council and other events. All this testifies to unanimity, love and mutual understanding which define the nature of relations between our two sister Churches”, he said.

Speaking about the memory of Ss Peter and Paul as two great pillars of the Christian Church, Metropolitan Hilarion stressed the different ways in which the Lord brought them to Himself. While St Peter became the head of the apostolic community and suffered martyrdom, St Paul became in essence the creator of Christian theology. As witnesses to the words and deeds of the Saviour, these two apostles not only related and handed them down, but also comprehended them theologically. “They created the foundation on which the entire Christian theology was developed and is developing to this day”.