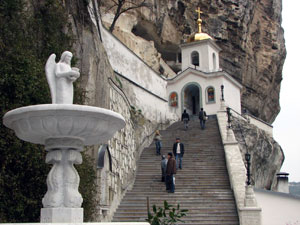 About 50 people—residents of the Crimea and Sevastopol—gathered on March 30 for a community work day in the Monastery of the Dormition in Bakhchysaray in the Ukraine. The event coincided with the anniversary of attack on this Monastery in 2004 when majlis activists broke down the structure being built by the monks for selling spiritual literature, proclaimed the ground “the area of general use” and held a Muslim prayer on it, reports Novy Region news agency.

The participants of the event helped the brotherhood of the monastery: men were involved in building and construction of the fencing at the Monastery’s boundaries while women cleaned the Monastery road.

It is known that devout Russian princes during the Great Lent walked on their pilgrimage to remote monasteries wearing only sackcloth. Thus walking through their principality as beggars and collecting alms, they saw what their subjects were like, how they treated beggars and strangers. They brought the kopecks collected to monasteries as their donations. This was a spirit of humility. It would also help the prince to know about his people’s needs.

This community work day is continuation of that pious tradition. About 50 people came: directors, businessmen, representatives of different professions—all those who decided to unite their efforts for the good of the monastery.