On the Murder of Father Daniil Sysoev

And if we are to learn a lesson from Father Daniil’s death, it must be that not all religions are created equal. Enough self-deception and false tolerance! May those who continue to repeat that all faiths believe in the same God be ashamed and may their mouths be silenced before the casket of a 35-year-old priest who was killed by someone who believed in a very different god from that preached by Father Daniil.
Priest Sergei Sveshnikov | 23 November 2009

Today, the holy Church celebrates the memory of its martyrs who lived a long time ago.  But it is time for us to also remember those who have suffered for Christ very recently.

Only a few days after a religious extremist shot 13 people on an American Army base, another extremist shot and killed a priest at his church in Moscow.  This was not the first priest who has been killed in Russia in recent years.  In fact, in the last two decades, at least 26 Russian clergy have been killed and many others wounded in failed murder attempts.  Of course, not all of these murders were motivated by religious beliefs; some were committed by criminals who did not believe in much of anything at all.  Yet, many murderers claimed to have been acting in the name of Satan, Krishna, or Allah.  The latest victim in a string of murders motivated by religion appears to have become Priest Daniil Sysoev, the rector of the Apostle Thomas church in Moscow.

Father Daniil was known for saving human souls from the grips of various sects and destructive ideologies.  He tirelessly worked to expose the lies by which totalitarian sects lure ignorant people into their assemblies, and led theological polemics with various other religions, including Islam.  It appears that a theological arsenal was not enough for some of Father Daniil’s opponents, and they decided to resort to firearms. 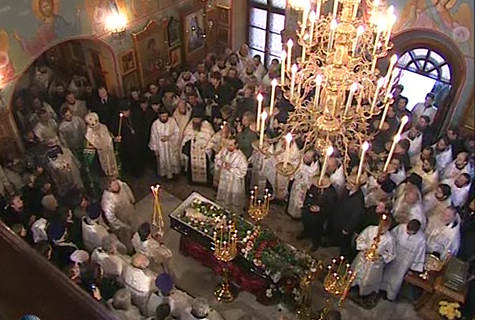 The investigation into the murder of Father Daniil has not been completed yet, but it is becoming increasingly clear to many that he was killed for his faith in Christ, his defense of the Church, and his preaching of the truth.  And if we are to learn a lesson from Father Daniil’s death, it must be that not all religions are created equal.  Enough self-deception and false tolerance!  May those who continue to repeat that all faiths believe in the same God be ashamed and may their mouths be silenced before the casket of a 35-year-old priest who was killed by someone who believed in a very different god from that preached by Father Daniil.

Here in the West and increasingly in Russia, we are told not to question beliefs, to tolerate difference, and to respect any kind of nonsense or crazy idea that anyone chooses to proclaim as their “theology.”  I believe it is time people began to use their God-given brains to take a closer look at their faith, to carefully examine its history and foundations, to question its principles and learn from where those principles came, and to familiarize themselves with the lives and teaching of the founders and leaders of their religious bodies and assemblies.  It is also time for us to examine our Orthodox faith—the faith for which Father Daniil gave his life.

We believe that human life is sacred because it is a gift from God, and those who murder people in the name of their god, do not believe in the same God as we.

We believe that Jesus Christ is Lord, true God of true God, and those who reject His divinity do not believe in the same God as we.

We believe that Christ came to save all who will accept His Gospel, regardless of color, gender, or nationality; and those who believe that one nation is better than another, or that one language—be it Arabic, Hebrew, Latin, or Slavonic—is more pleasing to God than another, do not believe in the same God as we.

We believe that Jesus Christ established His Church—the ark of our salvation—through His Apostles, and that this Church has persevered and has not been overcome by the gates of hell from the days of Christ’s earthly ministry even until this day.  We believe that the Holy Spirit of God guides the Church in the teachings and lives of the saints, and gives it life in the Holy Eucharist—the Sacrament of the Body and Blood of our Saviour.  We believe that salvation is in this Body, and those who do not believe this, do not believe in the same God as we.

Let us not fool ourselves: there are many demons and many idols, and not everyone who worships something that is spiritual in nature necessarily worships the one and only true God.  “Not everyone who says…, ‘Lord, Lord,’ shall enter the kingdom of heaven, but he who does the will of [the] Father who is in heaven” (Matt. 7:21).

Let us be vigilant and discerning in spiritual matters—our salvation depends on this.  Let us “not be led away by diverse and strange teachings” (Heb. 13:9), and let us warn others of their danger.  And let us remember in our prayers those who lost their lives for their belief in the true God at the hands of those who worship a very different “deity.”  Please remember in your holy prayers the murdered, newly-reposed Priest Daniil; may God give him a peaceful repose and strengthen other pastors who will continue the work in His vineyard.  Remember also Father Daniil’s wife and his orphaned children, and pray for the all-merciful Saviour to give them comfort and strength as they deal with this terrible loss.

Most viewed articles
Blasphemous and Obsessive Thoughts Come Into My Mind. What Do I Do?154
An Extraordinary Session of the ROCOR Synod of Bishops Convenes113
Funeral Services for His Eminence Metropolitan Hilarion of Eastern America and New York79
Is God a Fool?73
How to Respond to Opposition to the Gospel57
Metropolitan Joseph, Bishop Thomas Celebrate Centennial of Little Falls Parish55
A Piece of Rock Falls Down on the Skete of St. Anna on Mt. Athos43
PRAY: 14 Students, One Teacher Dead After Texas Elementary School Shooting41
His Beatitude Metropolitan Tikhon Issues Statement on Tragic School Shooting in Texas30
Most popular authors
Pravmir.com team235
Fr. Eugene Murzin154
Archpriest Stephen Freeman73
Archpriest Basil Ross Aden57
Subdn. Peter Samore55
Associated Press41
Metropolitan Tikhon of All America and Canada30