Oratorio Dedicated to Andrei Rublev is Performed in Vatican 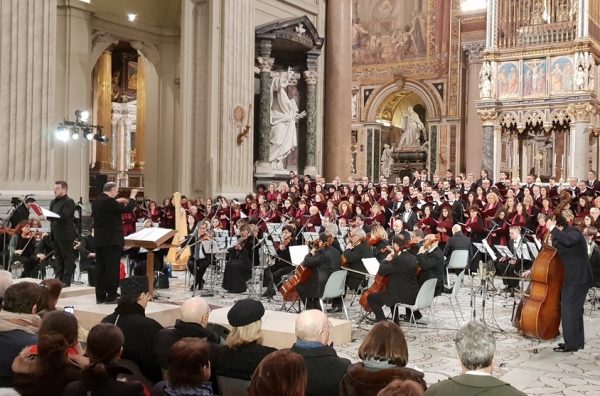 On 20 January 2019, a concert dedicated to Andrei Rublev was performed at the Basilica of St. John Lateran being timed to the 30th anniversary of the canonization of the great Russian iconographer.

The concert in honour of the saint canonized by the Russian Orthodox Church was performed for the first time in the history of the Roman Catholic Church. The Moscow Synodal Choir, the Choir of the Roman diocese and the Fideles et Amati symphonic orchestra performed the Smotrenje Lo Squardo Oratorio by Monsignor Marco Frisina who acted as a conductor.

At the beginning of the concert, the Moscow Synodal Choir conducted by its artistic director Alexei Puzakov, the honoured artist of Russia, and by Mikhail Kotelnikov, artistic director of the Youth Synodal Choir, performed “The Cherubic Hyman” and “In Thy Kingdom” composed by Metropolitan Hilarion of Volokolamsk.

The idea of this performance belongs to Monsignor Marco Frizina and was supported by the Moscow Department of Culture, the Moscow Patriarchate’s Department for External Church Relations, the Embassy of the Russian Federation to the Vatican City State and the Pontifical Lateran University.

“The Russian side considers the joint performance of the contemporary Italian music dedicated to the Russian iconographer very important. In Rublev’s creative work we find such traditional Christian values as love and mutual understanding,” Alexei Puzakov said. Commenting on the event, H.E. Aleksandr Avdeyev, Ambassador Extraordinary and Plenipotentiary of the Russian Federation to the Vatican City State, underlined its importance, saying that it was a sign of good relations between the RF and the Holy See.

The Moscow Synodal Choir performs in Rome for the fourth time. In 2014, 2015 and 2016 it performed musical pieces of the Western and Eastern Christian traditions together with the Sistine Chapel Choir at the Sistine Chapel in Vatican, at the at the Papal Basilica of St. Peter, the Cathedral of St. John Lateran and the Basilica of S. Mary of the Angels and the Martyrs.