Source: Pravmir.ru
Natalya Mihailova | 30 October 2014
October 28, 2014. The Google Culture Academy has launched a joint project with the Trinity-Sergius Lavra in the beginning of October, 2014. 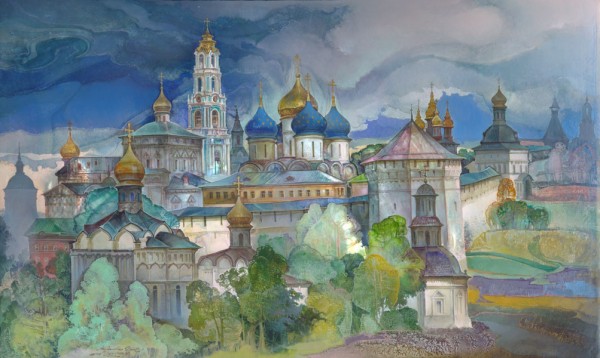 With the help of the Street View technology, the interior and exterior territories of the Lavra have been completely digitized. People all around the world are now able to make a virtual journey to the monastery and have a look inside its churches, examine world-famous icons painted by Andrei Rublev, and a silver shrine with the Holy Relics of the Venerable Sergius; and also to learn more about the construction and the development of the monastery after having visited this digital exhibition.

The Lenta.ru website has reported that Google has digitized hundreds of museums all around the world, including the Palace of Versailles, the State Hermitage, the Museum of Modern Art in New York, and the National Gallery of Australia in Canberra.

“We began this in 2011,” Luisella Matsa, Project Chairwoman of the Culture Academy, stated. “Back then there were only fourteen museums which participated in what is now the most famous project of the Culture Academy: the Google Art-Project. Now we have hundreds of partners in fifty countries. The main mission of Google is to make every piece of information available to all. The Culture Academy is a non-governmental project. All of our partners are non-governmental organizations: museums and other cultural institutions, which also put efforts into making culture internationally more desirable.”

The State Hermitage Museum was one of the first to take part in the Google Art-Project. Only recently a joint project with the largest literature museums has been implemented. Those museums are the State Literature Museum, the Pushkin Museum, the Mayakovsky Museum, the Bulgakov Museum, and others. Eight museums are now available to Internet users around the world. With the help of the “Literary Moscow” interactive map, everyone is able to learn about places associated with the above mentioned writers all by themselves.

Most viewed articles
The Tangled Web98
Love Endures When All Else Fails70
The Joy of Giving and Serving Others70
His Beatitude Patriarch Theophilos III of Jerusalem and All Palestine visits Russian Gethsemane67
Patriarch Daniel: The Tabor Light, perceived by the Hesychasts, is sought by every Christian enlightened at baptism56
Church Damaged during WWII Restored in Serbia44
First Virtual Museum of Roma Holocaust in Romania, Created by MNIR37
Restoring Our Humanity Through the Eucharist9
Most popular authors
Pravmir.com team111
Archpriest Stephen Freeman98
Aurelian Iftimiu93
Priest Luke A. Veronis70
Archpriest Basil Ross Aden70
Fr. Gabriel Bilas9