Organising Committee for celebration of the 1000th anniversary of St. Vladimir’s demise holds its first session

On 11th February 2014, at the Moscow Patriarchate’s Department for External Church Relations (DECR) there took place the first session of the Organizing Committee for celebration of the 1000th anniversary of the demise of St. Vladimir Equal-to-the-Apostles. 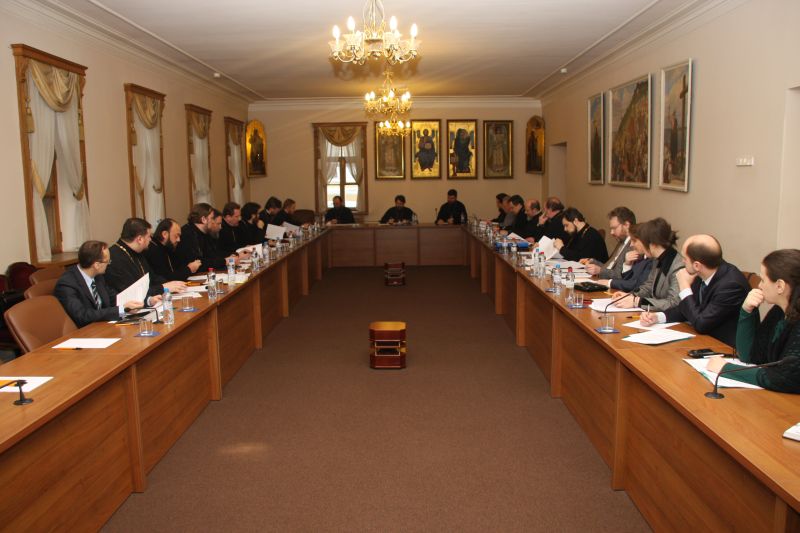 Chairing the session was Metropolitan Hilarion, chairman of the Organising Committee, which was set up by His Holiness Patriarch Kirill of Moscow and All Russia on 20 January with the purpose to prepare wide jubilee celebrations due to take place in 2015.

The Organising Committee consists of over twenty members, including Metropolitan Antony of Borispol and Brovary, chancellor of the Ukrainian Orthodox Church; Bishop Sergy of Solnechnogorsk, head of the Moscow Patriarchate’s administrative secretariat; Bishop Serafim of Bobruisk and Bykhov; and Bishop Iona of Obukhov, chairman of the Ukrainian Orthodox Church’s Department for Youth Affairs.

Metropolitan Hilarion underscored in his introductory address: ‘Veneration of the holy Prince Vladimir, the forefather of Holy Rus’, is exceptionally meaningful to the people of Russia, Ukraine and Byelorussia for the upholding a sense of national identity based on the values of Orthodox Christian tradition, for  consolidation of our Eastern Orthodox civilization and preservation of the integrity of spiritual and cultural space which has formed for 1025 years passed since the Baptism of Rus’.

‘The upcoming celebration of the 1000th anniversary of St.Vladimir’s demise will include many dramatic events in the entire canonical territory of our Church and elsewhere. It is important to hold the celebration not only in the capitals, but also in the regions to make it a nationwide event.’

The DECR chairman said that a team-work of different church institutions and cooperation with the Ukrainian Orthodox Church and the Byelorussian Exarchate are needed for programme development.

He added that draft programme should be completed in a month and presented to his Holiness Patriarch Kirill of Moscow and All Russia for consideration.

Concrete issues of preparation were discussed.