Source: DECR
Natalya Mihailova | 05 September 2014
On 3 September 2014, a session of the Organizing Committee for celebrating the 1000th anniversary of the demise of St. Vladimir Equal-to-the-Apostles took place at the Moscow Patriarchate’s Department for External Church Relations (DECR). The Committee, which was set up with the blessing of His Holiness Patriarch Kirill of Moscow and All Russia, is to prepare the church-wide jubilee celebration to be held in 2015. 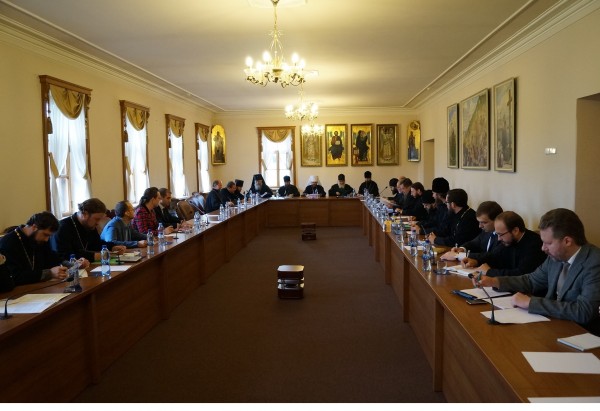 Metropolitan Hilarion, head of the DECR and of the Organizing Committee, chaired the session, taking part in which were seventeen members, including Metropolitan Arseny of Istra, the Patriarch’s first vicar for Moscow; Metropolitan Antony of Borispol and Brovary, chancellor of the Ukrainian Orthodox Church; Archbishop Dmitry of Vitebsk and Orsha; and Bishop Serafim of Bobruisk and Bykhov.

Metropolitan Hilarion noted in his introductory address that almost all members of the Committee had presented their proposals on the celebration in compliance with the assignment entrusted to them at the Committee’s first session.

His Eminence briefed those present on the celebration plans being elaborated by the Church and the state and on the contacts maintained by the officials for coordination of plans.

For instance, on 8 July 2014, there took place a meeting of the Presidential working group for the events commemorating St. Vladimir, the Baptizer of Rus’. The DECR chairman spoke at the meeting and told the participants about the activities of the Organizing Committee. Summary plan of the celebration and media plan presented by the Synodal Information Department were handed over to the working group to be used in its work.

Concrete issues of preparation were discussed. The participants reported on the execution of decisions taken at the first meeting of the Organizing Committee.

The program of events will be agreed upon in the near future and presented to His Holiness Patriarch Kirill of Moscow and All Russia for consideration.