Orphans from Syria visit Cathedral of St Vladimir in Chersonese

Source: DECR
Natalya Mihailova | 21 July 2015
On 17 July 2015, a group of Syrian schoolchildren from a boarding school for children of servicemen who died in Damascus, as well as representatives of the Orthodox community of Syria, visited the Cathedral of St Vladimir in the Chersonese. 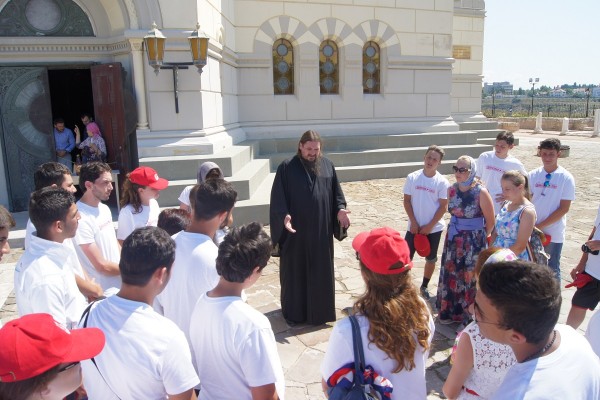 The children, who are spending their vacation at a youth camp in Crimea, came to the Chersonese with their new friends, children from Donbass and the Yaroslavl region.

Speaking to the children who had come from the war-torn Syria and Donbass, archpriest Sergiy Kholuta said, “The pain of Donbass is our pain. We are one nation. We support both Christians and Muslims of Syria, suffering from the war. Syrian people are our brothers and sisters. I believe that with God’s help smoke of war will clear, and peace will come to your homes soon. We pray for that. Your hearts are pure, and your prayer is pleasing to God. He will hear it.”

One of the children, Elias Halal, told Fr. Sergiy how his native town, Maaloula, had been seized by militants, and how his parents had died there. He presented the priest with an icon of St Anthony the Great, brought from Maaloula.

The Syrian schoolchildren will spend two weeks in Russia. They have already seen the Moscow sights, met with servicemen of the Preobrazhensky Regiment, and visited Sevastopol, Yevpatoria, and Balaklava.