Source: Today's Zaman
Natalya Mihailova | 07 January 2015
Members of the Greek Orthodox community in İstanbul jumped into the Golden Horn, despite heavy snow, to retrieve a wooden crucifix thrown into the waters as per traditional Greek celebrations of Epiphany, on Tuesday. 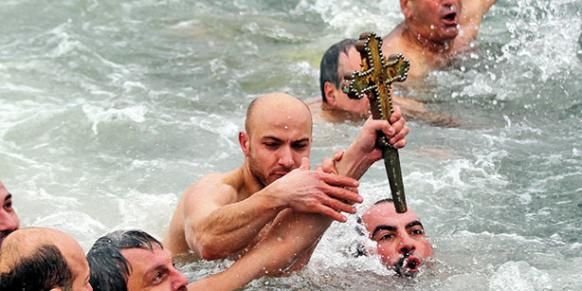 Orthodox Christians plunged into the cold waters of the Golden Horn to catch a wooden crucifix thrown in during traditional Epiphany Day celebrations.(Photo: Today's Zaman)

Members of the Orthodox community went to the Greek Orthodox Patriarchate in İstanbul’s Balat neighborhood for the rite led by Orthodox Ecumenical Patriarch Bartholomew to commemorate the birth and baptism of Jesus Christ with a ceremony. After the four-hour-long rite, people marched to the Fener dock on the Golden Horn.

Men plunged into the Golden Horn and raced to retrieve the cross, thrown by Ecumenical Patriarch Bartholomew, despite the cold weather in İstanbul, where it even snowed in some districts. Todor Pasev from Bulgaria became the first to retrieve the wooden cross from the waters. Bartholomew congratulated the Bulgarian and gave him a golden necklace with a cross on it.

Speaking to the press after the ceremony, Pasev expressed his happiness with being the first. He said it was not possible for anyone to freeze in this cold if they only stayed in the sea for 10 minutes. After responding to questions from reporters, Pasev again jumped into the water to swim.

This competition is held every year, despite freezing temperatures, as part of a ceremony to commemorate Jesus Christ being baptized in the River Jordan.

The Greek Orthodox Church in İstanbul celebrates the birth of Jesus on Jan. 6, like most Eastern Orthodox churches.