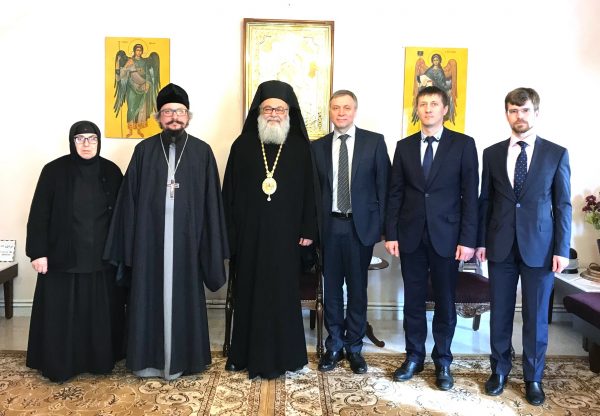 On 29 November 2018, at the Dormition Convent of the Orthodox Church of Antioch, located near the city of Tartus, Syria, His Beatitude Patriarch John X of the Great Antioch and All the East met with Hegumen Arseniy (Sokolov), representative of the Patriarch of Moscow and All Russia to the Patriarchal Throne of Antioch. During the meeting Fr. Arseniy introduced to His Beatitude Mr. I.P. Kharitonov, staff member of the Administration of the President of the Russian Federation, and Mr. M.A. Zelnik, representative of the Ministry of Defence of the Russian Federation, who had arrived in Syria with the blessing of His Holiness Patriarch Kirill of Moscow and All Russia and on the instructions of the leadership of the Russian Federation.

As the guests told the Primate of the Orthodox Church of Antioch, they came to Syria to offer help in restoring two Orthodox churches destroyed during the hostilities: the first one is located in the town of Arbin in Rural Damascus, and the second one in the town of Zabadani, on the border with Lebanon, as well as to render aid to the hospital in Al Hosn village, Homs province.

Mr. Kharitonov and Mr. Zelnik delivered to His Beatitude Patriarch John the funds intended for restoring an elementary Orthodox school in East Ghouta, destroyed during the war. His Beatitude cordially thanked the representatives of Russia for the assistance, wished them God’s help in their noble mission in Syria and gave them his Primatial blessing.

Taking part in the meeting were also Hegumenness Makrina, mother superior of the Dormition Convent, and Mr. T.A. Bokov, Third Secretary of the Russian Embassy in Syria.

After the meeting the guests accompanied by Hegumen Arseniy and Mr. Bokov visited the Al Hosn hospital and met with its director Dr. Halid Yazdgi. Mr. Kharitonov and Mr. Zelnik enquired about the medicaments and equipment that the hospital needs, and promised to provide all the things needs needed in the nearest future.