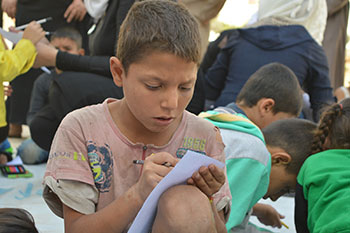 Moscow. The Russian Orthodox Church plans to open a help center in Syria for children wounded and injured during the war.

“The special care of Patriarch Kirill is people, and not just the restoration of ruined shrines. This is not an easy task for us. Each child is a separate personal drama of terrible events that turned their whole lives and the lives of their families upside down. Therefore, we hope to organize and equip a center for assistance to such children this year under the roof of the Russian Orthodox Church representative office in Damascus. There we can help a much larger number of children, be available to them, even after they receive their prosthesis and undergo the first rehabilitation,” said Metropolitan Hilarion, Chairman of the Department for External Church Relations of the Moscow Patriarchate, on Tuesday, reported Interfax.

He told personal stories of two children affected by the actions of terrorists in the republic.

Mahmoud al-Hassan, 15 years old, suffered rocket wounds, injuries to the eyes with ruptured eyeballs and skin burns during rocket bombardment of the school. The right arm was partially amputated. At the time of receiving serious injuries, Mahmud was in grade 7. Another boy, Ibrahim Mardan, is 12 years old. At school, a man approached Ibrahim and presented a toy, saying that he could take it home. When the man left, the boy went home, and the toy exploded in his hand. The explosion resulted in loss of the left upper limb and loss of vision in the right eye.

According to the hierarch, in 2020, the Russian Church plans to continue prosthetics for the affected Syrian children, as well as bring to Moscow those who need more specialized help. “I hope that God will send us assistants and trustees for this initiative,” the metropolitan added, recalling that over the previous year the Russian Church managed to organize prosthetics and rehabilitation of ten Syrian children in Moscow.

Most viewed articles
The Authenticity of the Vision of Christ in the Life of Saint Silouan121
Epistle of the Council of Bishops of the Russian Orthodox Church Outside of Russia105
Living with Cunning People83
“A New Creation” Through the Cross of the New Adam66
The work of the Church in society is quiet, but full of hope and love, says the Director of Lumina Publications37
Most popular authors
Archimandrite Zacharias Zacharou121
Pravmir.com team105
Fr. Andreas Agathokleous83
Priest Philip LeMasters66
Ștefana Totorcea37