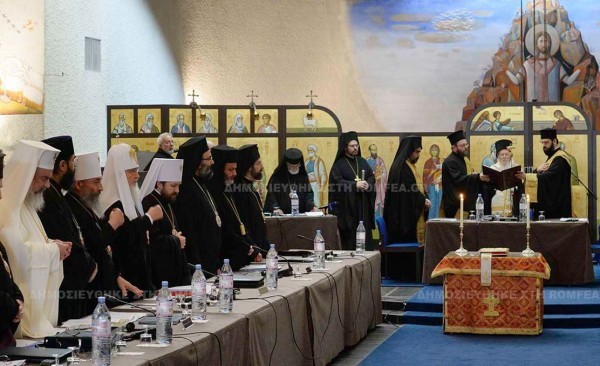 Considered to be the most important meeting of the world’s Orthodox Christian bishops in over a thousand years, the Great and Holy Synod which was to convene at the headquarter city of the Ecumenical Patriarchate of Constantinople in Istanbul, Turkey, is being relocated to Crete, citing geopolitical concerns.

The announcement came via the Athens News Agency, covering meetings of various Orthodox Church delegations meeting this week in Switzerland to formulate the agenda item and preparations for the June 2016 event.

The decision comes after “exceptional objective circumstances” (i.e. the inability of the Russian delegation to travel to Turkey because of the Russian-Turkish conflict).

The synod has been seen as a successor to the Second Council of Nicaea, the last major pan-denominational summit of Christian churches, which took place in 787— the first of its kind on more than a thousand years bringing together the heads of all of the autocephalous Orthodox Churches from throughout the world, has created an agenda of items that will be discussed at the synod, which is expected to take place in mid June.

2. The manner in which Autocephaly is assigned.

3. The manner of the administration of Autonomy in semi-independent Churches within the limits of Autocephalous Churches, such as the Orthodox Church of Finland under the jurisdiction of the Ecumenical Patriarchate.

4. The Diptychs. This is the order of the Autocephalous Churches, according to honor and ranking, by which the Primates are commemorated. The order of the Churches may change. (For example, the Church of Cyprus, although it is one of the most ancient and was recognized by the Third Ecumenical Synod in Ephesus in 431, is tenth in the order, having been surpassed by Patriarchates, which have been granted Autocephaly in recent times by the Ecumenical Patriarchate and not by an Ecumenical Synod.)

6. Canonical marriage impediments, especially in the case of Inter-Christian marriages.

7. Fasting. Ex. Should the canons for fasting on Wednesdays and Fridays be changed?

8. The relationship of the Orthodox Churches with the rest of the Christian world.

9. Orthodoxy and the Ecumenical Movement.

10. The contribution of local Orthodox Churches in the prevalence of Christian ideals of peace, freedom, brotherhood and love among people and removing racial and other discrimination.

“On the island (of Arki), there may be no priest, but we couldn’t not celebrate the Protectors of…