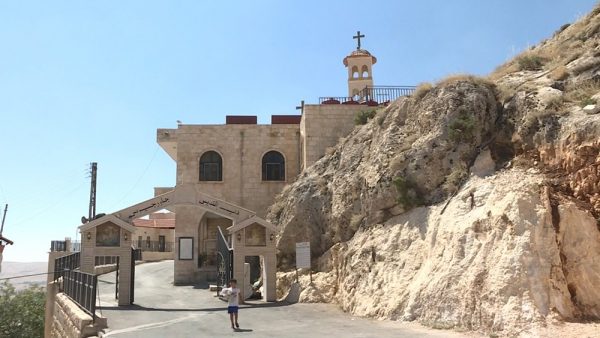 Situated about 17 miles north of Damascus, the small city of Saidnaya remains one of Syria’s largest centers of Christian pilgrimage. It is home to the Cherubim Monastery and the Monastery of the Nativity of the Mother of God, both belonging to the Antiochian Orthodox Patriarchate under His Beatitude Patriarch John X of Antioch and All the East.

Not long ago, the city was surrounded by militants, but having regained its freedom, another monastery—of St. George—is now under active reconstruction to accommodate the influx of Orthodox faithful.

The monastics of Saidnaya suffered much during the war—the city and its holy sites were heavily fired upon, but the monks did not leave, reports RIA-Novosti.

“A monk should have the strength of spirit to be an example for the parishioners. How could we leave our church and flee from Saidnaya?” asked Fr. Savva of St. George’s Monastery.

After their early morning rise at 3:00 AM and the morning Church service, the monks go to the quarry with picks and shovels to being work to expand and restore their church, and they are also assisted by faithful parishioners.

“When we come here to baptize a child or accompany our countryman on his final journey, only a small number of people fit inside the church—no more than 50 people. Therefore, we’re digging into the rock to expand the Church of St. George the Victorious. And everyone is working here completely for free,” noted engineer Jul Ngma. “Unfortuantely, three-quarters of the monastery buildings were destroyed by militants. Icon and Church utensils were stolen. We will certainly restore it,” said Fr. John Tali, abbot of both the Cherubim and St. George monasteries.

The abbot also noted that the monks will be glad to see pilgrims from Russia again. “We are eagerly awaiting our brothers in the faith. We managed to preserve and save Christian holy sites from the militants, and we are waiting for the day when we can organize joint prayers in our churches,” he said.