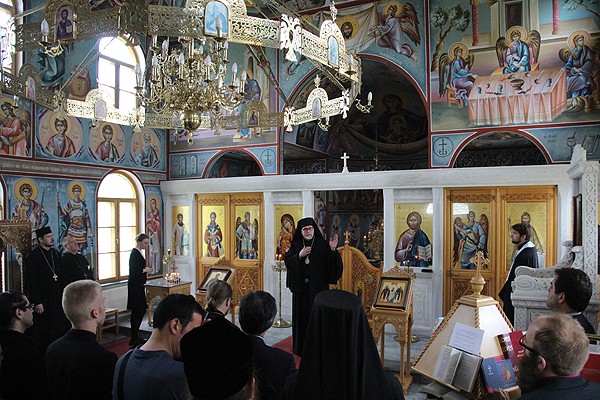 Reflecting the diverse national traditions within the common beliefs and teachings of Orthodox Christianity, nearly fifty musicians, composers, cantors, musicologists, directors, and singers gathered for the 6th International Conference on Orthodox Church Music which concluded on Friday, June 12. Hosted by the International Society for Orthodox Church Music (ISOCM), the conference marked the tenth anniversary of the Society, and celebrated the theme of “Creating Liturgically: Hymnography and Music.”

The conference was in many ways the most extraordinary during the Society’s young existence. Not only were there many musicians, scholars, singers, and composers from all over the world who have attended previous conferences, but there were a large number of new participants, both Orthodox and non-Orthodox alike. “We benefitted hugely from the presence of new members,” said Father Ivan Moody, chair of the Society’s board. He noted the involvement of new attendees is fitting, because they “shared their knowledge, learned from others, and will quite clearly carry the message of the ISOCM into the future.”

The Society serves to bring church musicians together on an international scale to explore music from the Orthodox Christian tradition with its biannual conferences hosted at the University of Eastern Finland, on its Joensuu campus. The conferences are unique throughout the world, providing singers and scholars alike with the opportunity to meet likeminded people.

“Our conferences are something of a United Nations for those who love Orthodox music,” said Maria Takala-Roszczenko, secretary for the Society. “It’s amazing to see so many people come together from diverse backgrounds, sharing their individual experiences with others while recognizing the common experiences we share of singing both liturgically in church and socially with old and new friends.”

The conference features presentations made by a majority of participants, covering a broad variety of topics related to the overall theme of “Creating Liturgically: Hymnography and Music.” Some presentations explored historical manuscripts from the Rila Monastery on Mt Athos while others looked at chant in Moldavia, Finland, and Russia. A number of presentations considered modern compositions of akathist hymns, a para-liturgical setting of Psalm 103, concertos, and oratorios based on sacred texts such as the Philokalia. 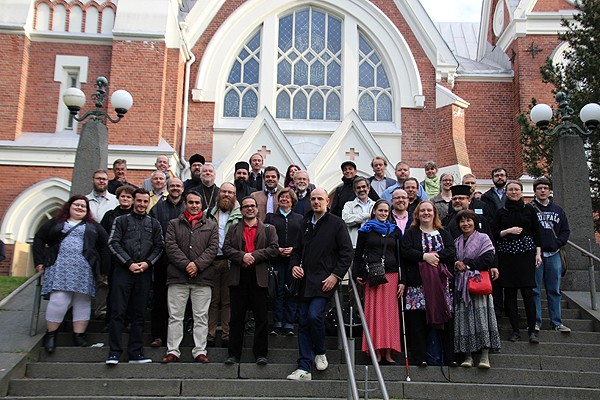 “The concert was truly one of the highlights of this year’s conference.” Father Ivan said. “To have at our conference one of the most renowned choral ensembles in the world, under the direction of Kaspars Putnins, was remarkable.” The concert also reflected the strong relationship which the Society shares with the region of North Karelia and, specifically, the town of Joensuu, whose hospitality is so warmly appreciated by the Society’s members.

Plans for the 2017 Conference are already underway, with the possibility of even more participants from around the world coming to Finland, including youth. The Society is exploring options to organize a Youth Camp to run in parallel to its conference, which would allow children from around the world to share their love of music and the liturgical arts while meeting other Orthodox Christian youth.

“It’s often said the youth are our future, but the Society believes we can help them discover the diversity in Orthodoxy by celebrating our unity within the Faith,” Takala-Roszczenko said. “If we’re able to bring musicians of all ages together, then the Society can help explore the future of music for all local Orthodox churches.”

“ISOCM conferences provide a setting for genuine learning and exchange – on the practical, theoretical and theological levels,” Father Ivan said, “In a world that often tends to value uniformity, ISOCM shows that enormous diversity is possible within unity – a unity which resides in the fundamental truths transmitted by the richness of the huge variety of music written for the hymnology of the Orthodox Church.”

For more information, photos, and video clips about the sixth conference, visit:http://www.isocm.com/conferences/2015/index.html andhttps://www.facebook.com/isocm.