Source: Daily Sabah
It was impossible to hold a service here or in other (ancient) churches in Turkey two decades ago. But today, we live in a new Turkey and are pleased to see many things have changed.
Natalya Mihailova | 23 June 2014 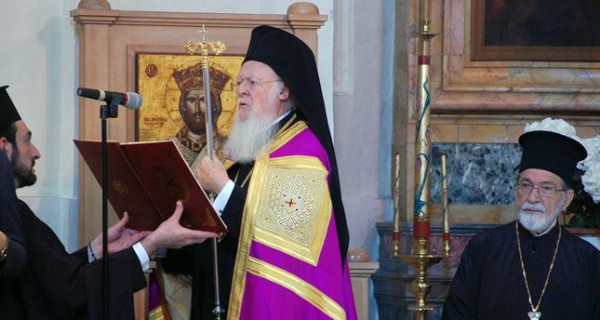 NEVŞEHİR – Presiding at a Sunday mass at a church in central Turkey, Fener Greek Orthodox Patriarch Bartholomew I said major changes in Turkey in terms of minority rights have paved the way for “previously unimaginable” religious services in the ancient churches of the Orthodox Christian community.

The annual mass attended by an Orthodox Christian community was held in Timio Stavru, a Byzantine-era church in a village in the central Turkish province of Nevşehir’s Ürgüp district, where a considerable Greek population lived in the 19th century.

Lawmakers from Greece, the Turkish ambassador to Athens, Greek businesspeople and artists also attended the mass during which the Patriarch delivered a sermon in Turkish and Greek. Bartholomew thanked Turkish authorities for allowing them to pray in the ancient church, which has been closed for years. “We have been praying here since 1999. It was impossible to hold a service here or in other (ancient) churches in Turkey two decades ago. But today, we live in a new Turkey and are pleased to see many things have changed. We are grateful to God and our state,” he said. Bartholomew also congratulated Muslims’ upcoming holy month of Ramadan.

Turkey’s non-Muslim minorities have long been treated as second-class citizens and banned from performing masses in ancient churches. The Justice and Development Party (AK Party) government, which came to power in 2002, seeks to restore the rights of those minorities and the first concrete step to that extent was returning properties to Christian communities. Along with the Greek Orthodox community, the Armenian community was also allowed to hold masses in restored churches in an unprecedented move by the government.

Most viewed articles
Maronite Patriarch Thanks Russian Patriarch for His Support for Christians in the Middle East112
Food for the Journey82
Athens and Jerusalem: the Role of Philosophy in Faith, with Analysis by St. Gregory Palamas82
The pandemic is a significant examination for us all, Transylvania Metropolitan says66
Fire Destroys Main Building with the Church of St. Peter Convent in Pavlodar62
Orthodox Priest Rescues Two People from Fire in Constanța53
We Are Not Saint Mary of Egypt (But We Can Still Repent)31
Most popular authors
Pravmir.com team174
Aurelian Iftimiu118
Dcn. Michael Schlaack82
Eric Hyde82
Archpriest Geoffrey Korz31