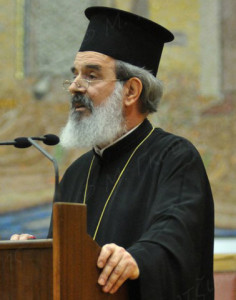 The struggle of asceticism, repentance, prayer and fasting cannot be brought to a conclusion unless it’s founded on proper faith. The Orthodox Church of the East has the privilege of having preserved the truth of the faith in God, the human person and the world. And this truth doesn’t equate to any ideology, but is an experience of life in the Holy Spirit. The prophets, apostles and holy Fathers experienced the presence of God and thereafter described it in their God-inspired texts.

The Gospel reading above refers to the unique experience of two disciples in becoming acquainted with Christ the Saviour at first hand. At the beginning, Nathaniel casts doubt on what Philip tells him about the person of Christ because there was the notion that nothing good could come from Nazareth. Philip was unable to convince his friend with words and this is why he deploys the more compelling argument: “Come and see for yourself”. The brief discussion between Christ and Nathaniel impresses the latter and he spontaneously confesses: “Rabbi, you’re the Son of God, you’re the King of Israel”. The crucified King!

Ever since, it has been clear in the sacred texts that the central person and the reference point of the Church is Christ the Saviour. On the next level, the central person is one who stands “in the model of Christ”, who imitates Christ and takes up the great burden of the cross of responsibility, of service and sacrifice. The Orthodox Church is the one, holy, catholic and apostolic Church, while, at the same time, it’s the Church of the Fathers. Because the holy Fathers, in Synods, assumed the burden of responsibility and preserved the real truth concerning Christ. And they taught, without error, that in Him co-existed the created and uncreated, the visible and the invisible, the passible and the impassible, the described and the indescribable.

The depiction of the person of Christ is based on the features of His human nature and the fact of the incarnation. This is why, in the Old Testament, the use of  images was not common. But God became a human person and took on a human form, “He performed miracles, suffered, was crucified, rose, ascended… and was seen by people”, according to Saint John the Damascan. So all these events can be painted and depicted. This painting has an educational and reductive character and contributes to our acquaintance with the person of Christ.

His incarnation, cross and resurrection have implications for the whole world and occurred for the whole of humankind, from Adam to the last one who’ll be born of woman. So the Church is global and prays “for the peace of the whole world”. The ascetic and hesychast nature of the spiritual life doesn’t negate its ecclesiological and ecumenical character, but is a pre-condition for it. With the Eucharist at the centre of its spiritual life, Christians aren’t united in order to foster hatred against some “others”, but to renew their faith in Christ and their love for the “others”. This is why there’s no room in the Orthodox Church for any “Orthodox arcs”, which serve other purposes. Rather, the Orthodox Church is itself bent like a bow and its power “is perfected in weakness” (II Cor.12, 9).

The late Elder Sophrony Sakharov taught that the restriction of the person of Christ to the level of nationalities was a great failing. In this way, the path opens to hatred between nations, towards hostility between social groups. He writes that he doesn’t know any Greek, Russian, English or Arab Christ. Christ for him is everything, the transcendent being. If anyone imitates Christ, it means that they suffer so that the whole of humankind can be cured and saved. The ascetic life broadens the conscience of Christians and allows them to understand the psychology of other people. When we learn to live with one person, we learn to live with millions of others who are like them. In this way we gradually enter into profound pain for the whole of humanity. With our repentance, we do not live merely our own personal drama; we experience within us the tragedy of the whole world.

This is where Orthodox mission finds its meaning. The selfless missionaries who carry the truth of the Orthodox evangelical faith to all parts of the globe don’t rely on worldly strength, but on the power of love from the Cross. This is where the Church takes on the things of the world, sanctifies them, purifies them and creates genuine Christian communities. And it may be from there that we will see the renaissance of the Christian life, which has been compromised in our own society. It may be that the Christians of the Third World live the faith in Christ with less guile, without turning it into a national ideology, and that, in a few years they may invite us: “Come and see that the Lord is good”.