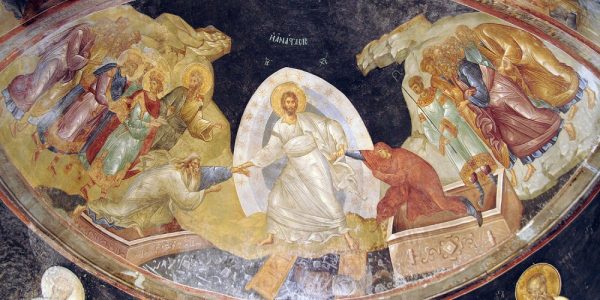 The descent of Christ into hell. Fresco in Chora Monastery, Constantinople. 14th century

In our first year as missionaries in Albania in the early 1990s, Pres. Faith and I spent our first Holy Week and Pascha in several villages that hadn’t celebrated Pascha for 26 years. All their churches had either been destroyed or closed, and people had been persecuted for expressing their faith in any way. What an unforgettable Holy Week traveling from village to village, offering liturgical services, proclaiming our faith, while encountering the remains of militant atheism.

On Pascha night in the village of Himara, we held the Resurrection in a large church that had not been destroyed. Several hundred people packed into this church out of curiosity for the first time in a generation. Some casually entered the church, lighting their cigarettes from the candles while smoking in the church. Other carelessly chatted and talked as if they were in a bazaar, oblivious to what was going on around them. Most had no understanding of what was happening. Yet, we realized this was the beginning of trying to proclaim the Good News about Jesus Christ and His miraculous resurrection to a religiously ignorant people.

On Pascha Sunday, someone had died and they asked me to come to their house and offer a prayer for the dead person. At the service, I offered a few words about the hope we have in Christ’s Resurrection. As it was Easter Sunday, I shouted out numerous times “Christ is Risen!” The 60 year old son of the deceased person, however, scoffed at my words and sarcastically replied, “Don’t tell us such fairy tales. We know these stories of religion are the opium of the people. Stop such nonsense.”

“You are free to believe whatever you want,” I calmly responded, “and I understand that believing someone resurrected from the dead absolutely appears ridiculous, yet for us Orthodox Christians, here lies the foundation of our faith. God became a human being in the person of Jesus Christ, willingly accepted and experienced death, and then conquered death itself! Christ rose from the dead to show death cannot contain Him! And anyone who chooses to follow Jesus Christ and His way of life, chooses to participate in this victory over death! Thus, we Christians live life in a manner where we no longer fear death. Christ is Risen and we live every day with a joyous, spirit filled with hope and light!”

Here lies the fundamental question for each one of us as we prepare to celebrate Christ’s Resurrection and the great Feast of Holy Pascha. Do we actually believe and truly participate in the joy, power and ultimate restoration of Christ’s Resurrection or do we treat this unbelievable reality as simply a myth or fairy tale, like our secular society chooses to believe?!? Does the Resurrection of Christ affect our worldview of life, of how we live life? Will the forgiveness and mercy, the love and hope, the victory that radiates from the Risen Lord be the spirit which we carry throughout our lives? The choice is ours! And the choice we make determines how we relate with everything else in our lives!

As missionaries in foreign lands, Pres. Faith and I understood that this Good News of Christ’s Resurrection is the center of what we believe and proclaim. Coming back to America after a decade abroad and serving in 21st century secular New England as an Orthodox priest, I realize the centrality of this same message is just as true and necessary to proclaim. Throughout history, Christianity and the Church have offered much good to the world – from schools to hospitals to social care and movements that have changed society and positively touched the lives of millions. Yet, the greatest gift, above all else, is the Good News of hope that Christ gives to the world in the face of evil, darkness and death itself.

The resurrection is central to everything we believe! It is the essential claim that differentiates Jesus Christ from all other founders and leaders of world religions. Christ rose from the dead and through His resurrection destroyed the power of death for us all! Neither Moses nor Muhammed nor Buddha nor any other world religious leader claims this!

Death is the ultimate and greatest fear for countless people. We live in a world that tries to flat-out deny death, or at best tries to ignore it. We Christians, however, view death from a different perspective than the rest of the world. We live in the hope of the resurrection! We believe in our Risen Lord who has conquered death along with all sin, evil, and darkness.

St. Paul boldly claims, “I consider that the sufferings of this present time (including death) are not worth comparing with the glory about to be revealed to us! … Listen, I will tell you a mystery! We will not all die, but we will be changed, in a moment, in the twinkling of an eye. For the trumpet will sound and the dead will be raised imperishable. For this perishable body must put on immortality. Remember, death has been swallowed up in victory! O Death, where is your victory? O Death, where is your sting?”

Christ is Risen and death is defeated!

Christ is Risen and all fear is vanquished!

Christ is Risen and suffering will not remain!

Christ is Risen and the doors of paradise are opened for all who believe!

Christ is Risen and the devil with all his forces of darkness and evil will not prevail!

Back in the 2nd century, the Roman historian, Aristides, wrote about this new religion, Christianity, and specifically about their strange attitude toward death. He marveled, “If any righteous person among the Christians dies, they rejoice and offer thanks to God, and they escort the body with songs and thanksgiving as if the dead person was setting out from this place to a better place.”

The early Christians understood the resurrection as the foundation of their faith and life and therefore rejoiced in the face of death!

St. John Chrysostom compared the non-Christian with the Christian by saying, “When a loved one dies, the unbeliever sees a dead body, but the Christian sees a body asleep. The unbeliever says the body has gone. We Christians agree, but we remember where he has gone – to the same place that Saints Peter and Paul and all the saints abide. We remember that he will rise, not with tears of dismay, but with splendor and glory in paradise!”

Christ is Risen! Truly He is Risen!

With hope and joy in our Risen Lord Jesus,

Through the Cross Joy Has Come Into the World

“Christianity is a joyless religion.” Alexander Schmemann once stated that the greatest accusation made against followers of Jesus Christ…