Outbreaks, Mass Conversions, And Living Not By Lies 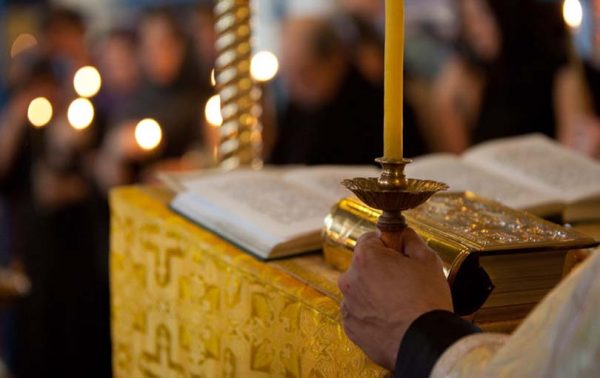 It is nothing short of a miracle. In a year many people have described as the worst in a generation, our area of the country has undergone what can only be described as a mass conversion – indeed, and explosive conversion – to the Orthodox Church, filling our own parish to overflowing. The growth is shocking and overwhelming. Our own clergy are paralyzed and dumbfounded.

To suggest that three baptisms are a “mass conversion” is not simply an overstatement – it is a lie. It is a lie designed to elicit a certain emotional response – in this case, a positive one.

We live at a time of Great Lies, where it has become daily parlance even among Christians to say something is black when it is clearly white, or in Orwellian fashion to state that two plus two equals five.

Nowhere is this more apparent that the flu virus of the last year – the plague which by any other name is still a flu virus. Abetted by the media, the Great Lie describes a single case of this flu as an “outbreak”, rather than a “case”, perhaps in the same way we might speak of the “mass conversion” of our country, rather than “three baptisms”.

This is living by lies.

This is seen also in public discourse over social and political issues. Where the Gospel and Church Fathers teach the unity of all people through Communion with the One Blood of Jesus Christ, activists of the Big Lie – led by the Father of Lies – pit neighbour against neighbour based on skin pigment and Critical Race Theory. Some deceived Orthodox Christians add their voices to this madness. Some Church leaders even march beside the Marxist allies of those who in previous generations nailed Orthodox priests to the doors of Orthodox temples.

This is living by lies.

This is also seen in the hope that some plan – or some leader – might be able to turn the tide of the Big Lies that have overtaken us. Certainly, good leaders can help for a while. But ultimately, it is each one of us who must decide whom we serve, and how we will live: will we serve Christ, or will we serve the Big Lie? We lie to ourselves when we believe that the responsibility for telling the truth rests with someone else: with a political leader, or with a Church leader. That responsibility begins with each of us.

If we are Christians, we may say we do not want to serve the Father of Lies – but have we adopted a go-along to get-along approach with our family, friends, and co-workers on matters of faith and values?

When we see something false, do we say it is true (or simply say nothing at all), just to avoid a conflict?

Are our friendships and relationships a contradiction between Christian life – living with Christ all the time – and living for ourselves?

The Big Lies are starting to take their toll on us, but they are far from finished making their demands.

As Orthodox Christian author Rod Dreher outlines in his new book, Live Not By Lies, the soft totalitarianism we now face is nothing short of a new religion: it will demand everything from us.

The experiences of those who lived through other totalitarian societies such as the Soviet Union teach us that the religion of the Big Lie and faith in Christ cannot coexist: one must inevitably give way to the other. Just as our life in Christ is called to be total – including our family, entertainment, money, sex, politics, friendships, speech, and everything else – so too the Big Lie of totalitarianism demands everything from us. We must decide whom we serve: Christ, or the Father of Lies.

Life in the Big Lie may give you the impression that it only wants your part-time loyalty, that it will give you the rest of your life and choices “for yourself”, but those who have lived with it (and under it) know that the Big Lie demands everything.

Most of the saints of the Church are martyrs – and the word martyr means a witness. As Orthodox Christians, we cannot be witnesses with our silence, by distorting the truth, or in living by lies. Only the truth will set us free.

In our time of Great Lies, this is a perfect place to start our journey out of the darkness.