Over 100,000 Romanian Children Baptized in Italy After Bishop Siluan’s Enthronement 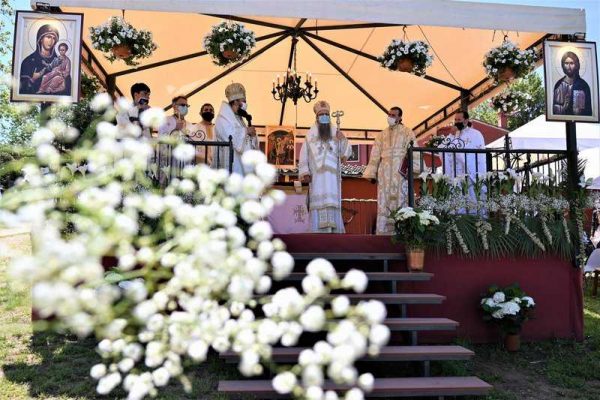 Photography courtesy of the Romanian Orthodox Diocese of Italy

Italy hosts the largest community of Romanians outside Romania. The first Romanian parish appeared on the peninsula in 1940. Still, it was not until May 8, 2008, that Orthodox Romanians in Italy had their own bishop, in the person of His Grace Bishop Siluan Şpan.

Marking the 13th anniversary of Bishop Siluan’s enthronement, Assistant Bishop Atanasie of Bogdania made a retrospective of the diocese’s activity.

There are 292 parishes, five monasteries, two hermitages, one monastic settlement and 132 non-parish churches of Orthodox Romanians. These communities were established with much effort, many of them being housed in places of worship belonging to the Catholic Church.

In his message, Assistant Bishop Atanasie stressed that 17,000 Romanian families were blessed with the Sacrament of Marriage and over 100,000 children were baptized during these 13 years.

The hierarch added that “thousands and thousands of souls of our Romanian Orthodox brothers and sisters, to which are added several thousand other Orthodox Italians, find their comfort and consolation, hope and courage to face the hardships of life in the spiritual oases that constitute the parish communities and our monastic settlements in the desert of contemporary society.”

“Many of them find the meaning and joy of life, a joy often overshadowed by the increasingly secularized society of which they are part. There are also many who, although baptized as Orthodox, still discover the richness and beauty of their faith. Many are those who have finally found, in faith and by faith, a true answer to the search for the ephemeral “happiness” for which they left home.”

“Our Diocese’s parishes and monasteries, in addition to spiritual food suitable for their natural purpose, share bodily nourishment with many of those crossing their threshold: they clothe the naked, visit the sick and those in prisons, thus bringing much comfort to those overthrown by the hardships and even the cruelty that often characterizes the society in which we live, especially in this second year in which we still bear the imprint of the pandemic.”

For the social actions carried out during the pandemic, both Romanian Orthodox hierarchs in Italy were decorated by the President of Romania.