Over 20 Children Are Baptized into Orthodoxy in Kenya

Most of the newly baptized Christians are orphans.
Pravmir.com team | 09 September 2021 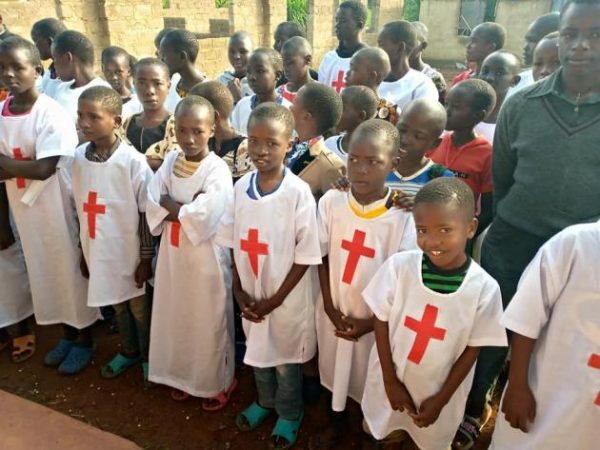 In total, 29 people were baptized in the waters of the local river. Nine more children from the orphanage became Orthodox Christians in early spring.

According to Fr. Agapius Omukuba, most of the newly baptized people belong to the Pokot people – one of more than 40 Kenyan tribal groups living in the northwest of the country. In Kenya with 46 million population, specialists say there are about 783,000 representatives of this ethnic group.

Father Agapius and his wife Dora find future residents of the orphanage mainly in the slums of the Kenyan capital – Nairobi. In the orphanage, they are provided with basic necessities, including shelter, clothing, daily food, education and medical care. Most children are orphans, and the Orthodox orphanage in Malawa is often the only way for them to escape poverty and sometimes death.

Now Father Agapius and Dora are hard at work building a new house, school, hospital and church. They acquired the land for these objects thanks to the generosity of benefactors and with the blessing of Bishop Athanasius (Akunda) of Kisum and West Kenya of blessed memory, who died in 2019.

Most viewed articles
What Is Rejected Becomes the Cornerstone121
Hierarch of the Jerusalem Patriarchate Speaks in Support of His Holiness Patriarch Kirill92
The Forgotten Virtue of Stability90
Utah Church Prepares, Welcomes All for Consecration89
His Beatitude Patriarch Theophilos III and bishops of the Russian Church Abroad attend a concert marking the 150th anniversary of the birth of Sergei Rachmaninoff in Jerusalem87
The Savior of the Hopeless, or Is It Possible to Be a Good Person and Not Be Saved?74
Supreme Court Overturns Roe v. Wade in Mississippi Abortion Ruling66
‘The post-Roe generation’: Pro-lifers set their eyes on heartbeat bills, chemical abortion bans64
Most popular authors
Pravmir.com team268
Archpriest John Moses (+2019)121
Hieromonk Gabriel90
Alexander Tkachenko74
CBN News66
Ryan Foley64