Over thirty Orthodox churches, another ten are under threat in Ukraine – Patriarch Kirill

Source: Interfax-religion
Natalya Mihailova | 25 January 2016
Moscow, January 25, Interfax - Patriarch Kirill of Moscow and All Russia is concerned about the scale of the persecution of the Ukrainian Orthodox Church of the Moscow Patriarchate in Ukraine. 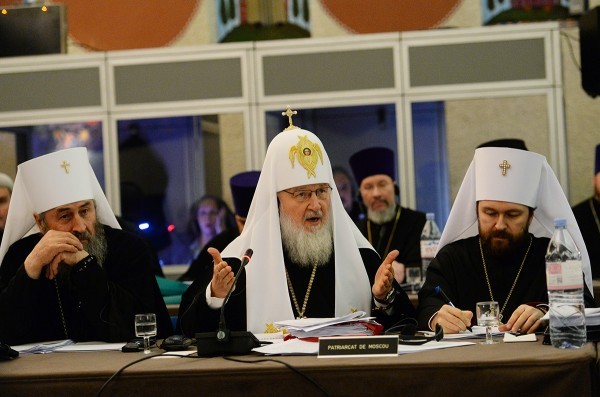 “Over thirty churches of the Ukrainian Orthodox Church have now been taken over and at least ten are under the threat of attack by schismatics and nationalists, who are trying to prevent what is happening as voluntary transition of believers to the so-called Kiev Patriarchate,” the patriarch said during a meeting with the heads of Orthodox Churches in Chambesy, Switzerland, on the preparations for the Pan-Orthodox Council, the patriarch’s press service reported.

“In actual fact, it was a real bandit, raiding takeover: they hold a meeting of people who are unrelated to the community, then they fake the charter documents with the authorities’ assistance, take over the church using nationalist militants, and they throw the church community and the priest out in the street,” he said.

Patriarch Kirill said communities of the canonical Church driven away from churches win all lawsuits, “but schismatics and their semi-bandit military groups ignore court rulings.”