Paganism is Better and More Honorable

Source: Notes on Arab Orthodoxy
If we make a comparison between our countries, where religion and sectarianism prevails above all else, and the countries of the West where there is a separation between religious and secular authorities, we immediately discover that we are still fighting and slaughtering each other in the name of the one God while Western societies live in peace, security and stability.
Fr. Georges Massouh | 12 July 2014 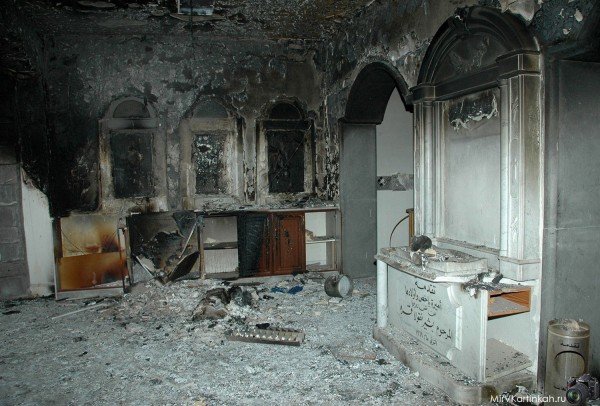 When I was a student in seminary, my attention was drawn by the words of one of my professors about pagan religions being more tolerant with regard to other religions than the monotheistic, Abrahamic religions. In those times, in each city there was a “pantheon” that included images of all or most of the gods. This was the case in Rome, Athens, Alexandria… and also Mecca.

When the monotheistic religions came, they put an end to the other religions and to freedom of belief and worship. These religions practiced the principles of takfirism, with the power of the state and of law, against all those who disagreed with the religion of the Christian emperor or the Islamic caliph. Pagan temples were destroyed or changed into churches. And in the final stage, the churches were changed into mosques…

The monotheistic religions cannot bear difference of opinion. They rush to declare those who do not believe in their dogmas to be infidels or heretics. So that zeal does not consume the hearts of those who might respond to our words by citing revealed verses, we will state that what we have said has been the reality of religious practice over two thousand years, not what the foundational texts or the prophets say… Unfortunately, in our region we still see argument upon argument for not accepting those who are religiously different or for marginalizing them in public life.

If we make a comparison between our countries, where religion and sectarianism prevails above all else, and the countries of the West where there is a separation between religious and secular authorities, we immediately discover that we are still fighting and slaughtering each other in the name of the one God while Western societies live in peace, security and stability.

For two hundred years we have been hearing hypocrisy like that the West is more scientifically advanced than us, but we are more advanced morally than them. Where is this morality that we possess? Massacres, slaughter, forced migration, people’s homes destroyed over their heads, indiscriminate shelling, suicide bombings, kidnapping, sectarian and religious discrimination, takfirism, not accepting the other? Where is this morality when a person becomes a commodity that’s not even worth a penny in the bazaar of religions and when he becomes just a number in the tally of those killed?

It is said that the West has returned to paganism and that the secular system is an infidel system because it separates religion and state. We, however, say that the West’s “paganism” is better than our barbarism and backwardness. The West does not outlaw religious affiliation. Christians, Muslims, Jews, Buddhists, Hindus, atheists and agnostics practice what they believe with complete freedom and conviction with total equality of rights and responsibilities. They build churches, mosques and temples when and where they want and they live in peace and mutual respect. They do not kill each other on account of religious, racial or sexual affiliation… Where are morals, when the “infidel” secular West chooses its presidents and representatives through democracy, without spilling anyone’s blood, while there is no change of government in our countries without large amounts of bloodshed?

At a time when we are returning to the Middle Ages the whole world is following World Cup matches. As people’s heads are rolling in our countries at the feet of thugs and murderers, balls are rolling at the feet of footballers. While in our countries countries and organizations are competing with each other in God’s name for who can record the greatest number of people killed, the “gods” of football are trying to score the most in their opponents’ goal.

Yes, paganism has a sophisticated civilization that accepts diversity and plurality in public affairs and preserves the blood of its children. One thousand times no to those who speak in God’s name who have removed God from His throne and sit in His place and permit themselves to spill blood and wreak destruction.

Most viewed articles
The Forgotten Virtue of Stability148
‘The post-Roe generation’: Pro-lifers set their eyes on heartbeat bills, chemical abortion bans104
Utah Church Prepares, Welcomes All for Consecration103
The Savior of the Hopeless, or Is It Possible to Be a Good Person and Not Be Saved?87
Supreme Court Overturns Roe v. Wade in Mississippi Abortion Ruling77
On the Shoulders of Giants45
Most popular authors
Hieromonk Gabriel148
Ryan Foley104
Pravmir.com team103
Alexander Tkachenko87
CBN News77
Archpriest John Moses (+2019)45