Source: TASS: Russian News Agency
The Russian Orthodox Church with an estimated congregation of about 50 million believers is the largest of them
Natalya Mihailova | 04 February 2016
MOSCOW, February 3. /TASS/. The forthcoming Holy and Great Council of the Orthodox Church that is due to convene on the Isle of Crete this summer will endorse decisions only upon consent of all the fourteen Patriarchs of canonical national Orthodox Churches, Metropolitan Hillarion, the chairman of Moscow Patriarchate’s Department for External Church Relations said on Wednesday. 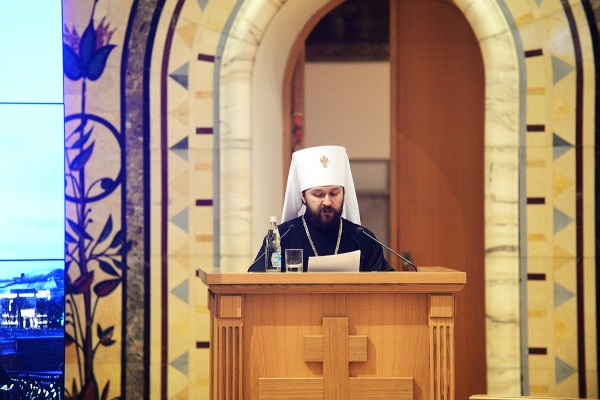 “All the decisions at the Pan-Orthodox Council will be taken by consensus,” he said it at a news conference upon the results of a session of the Council of Bishops of the Russian Church.

“This means each national Orthodox Church will have a delegation of twenty-four (or fewer but in no way more – TASS) bishops that will have one vote,” Metropolitan Hillarion said.

The Metropolitan feels confident that “the Council will be held in a fraternal atmosphere that will enable us to discuss the problems, on which we have consensus.”

“That’s why we put forward the idea of solving all the outstanding problems by consensus,” he said.

Efforts to prepare the Pan-Orthodox Cathedral started out as far back as in 1961 and have been proceeding with certain intervals ever since then. It is likely to become a milestone event for the entire Orthodox world.

Each national Orthodox Church will send 24 bishops to the Cathedral.

Apart from the Russian Church, there are fifteen national or autocephalous Eastern Orthodox Churches that function independently of one another but are linked through liturgical communications the Church of Constantinople (Turkey), the Church of Alexandria (Egypt), the Church of Antioch (Syria), the Church of Jerusalem, the Georgian, Serbian, Romanian, Bulgarian, Cyprian, Helladic, Polish and Slovak Churches, and the American Church.

The Russian Orthodox Church with an estimated congregation of about 50 million believers is the largest of them.

The last officially recognized Pan-Orthodox Council, which is recognized by the Eastern Orthodox Churches as an ecumenical one, took place in Constantinople in 879.