More pan-Orthodox liturgies on the cards 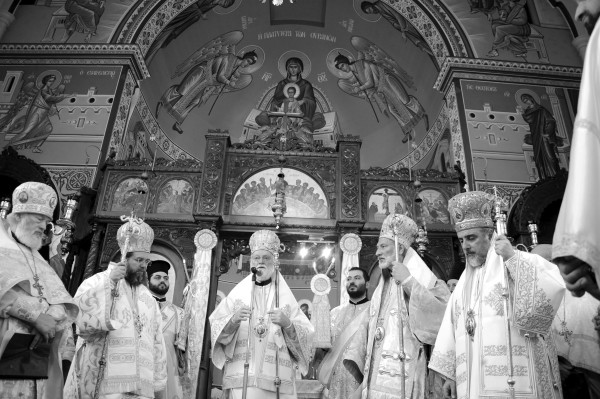 Pan-Orthodox liturgies are set to become more common, as the Greek Orthodox Church of Australia expressed its willingness to promote joint liturgies in the future.

Bishop Iakovos of Militoupolis tells Neos Kosmos after the success of the WWI pan-Orthodox liturgy on Saturday, the church is looking to host more joint services if the right situation arises.

Already the Victorian Archdiocese is hoping to bring the annual NSW inter-orthodox esperino (evening service) on the Sunday of Orthodoxy down to Melbourne.

“What has been happening for many years in Sydney is there’s a pan-orthodox esperino on the Sunday of Orthodoxy, unfortunately that’s not being repeated here but that’s something that we’re looking at,” Bishop Iakovos tells Neos Kosmos.

Being a part of the WWI liturgy that brought Greek, Serbian, Russian, Romanian and Antiochian Orthodox priests together, Bishop Iakovos believes the success of the event will create more interest in continuing the tradition.

“This activity this year will probably be a catalyst for other opportunities as well,” he says.

It was the first time the bishop had participated in a pan-Orthodox liturgy in his time in Melbourne, and was amazed at the atmosphere the service created.
“We had five languages, it was beautiful,” he says.

“It was really a great sign of solidarity, with language not being the barrier that separates but actually the liturgy and the prayer is the unifying factor.”
Hundreds of multi-faith parishioners packed the Axion Esti church in Northcote, many coming in national consumes and choir groups from many nationalities helping with the psalms.

Each Orthodox priest had the opportunity to give the liturgy in their church’s native tongue, with an English liturgy also held.

The church service was then followed by a memorial service that had dignitaries laying wreaths at the Cenotaph.

The Consul General of Greece for Melbourne Christina Simantirakis was joined by local MP Jenny Mikakos and members of the Australian Defence Force in laying wreaths for the fallen, marking the anniversary of the First World War.

The event was organised by the Greek Orthodox Church, with Bishop Ezekiel taking a leading role in proceedings.