The Role of Parish Priests as Spiritual Fathers 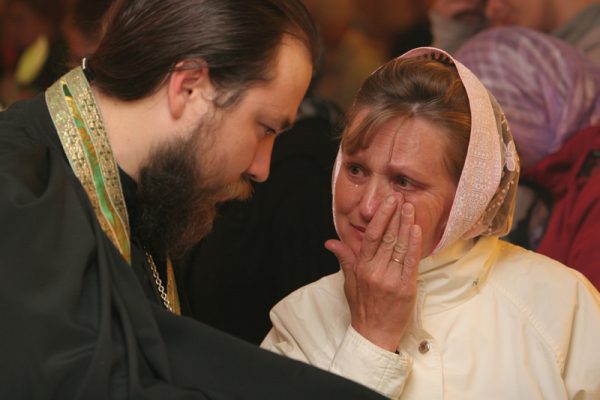 The term “Spiritual Father” (in Russian “dukhovnik” (духовник)), has a range of meaning that has to be properly understood for this question to be answered. At the lowest level, one could speak very loosely of a priest that they regularly confess to as their spiritual father. But more properly, a spiritual father is one that you have an ongoing spiritual relationship. The difference is somewhat subtle, but a person might regularly confess to one priest for a period of time, but then switch confessors, and begin confessing to another priest. But when you develop a relationship with a priest that you maintain over a long period of time, and often when separated by distance, that is more a spiritual father/child relationship.

The highest sense in which the term is used would be in reference to someone who has the spiritual gift of eldership… but this a fairly rare gift, and one should be extremely cautious about searching out such a relationship, because there are more people who think they are spiritual elders than there are those who actually have that gift.

The difference between the relationship between a parish priest and an abbot in a monastery is primarily the question of obedience. A monk is expected to be completely obedient to their Abbott, short of the abbot asking him to do something immoral or contrary to the teachings of the Church. An abbot can have such a relationship because an abbot is also responsible for the monks under their authority. They ensure that the monks have a place to stay, and food to eat. In that context, this level of obedience has an important role in the spiritual development of a monk.

It is completely improper for a parish priest to expect that kind of obedience from a laymen, because he has does not have the same level of responsibility for his parishioners. In other words, if a parish priest were to tell a man to quit his job, the parish priest is not going to ensure that his bills are paid, or that his wife will not divorce him because he is failing to provide for the family. Consequently, what priests generally express to their people in confession is on the level of advice, which they can take or leave — because they are ultimately responsible for their own choices. Of course one should not dismiss advice from their confessor lightly, but it is simply a fact that different priests will give advice that will differ in some respects, and so it should not be taken as if it was delivered to Moses on Mount Sinai… unless of course it actually was, because the priest is simply conveying what Scripture or Tradition clearly teach. If a person confesses that they are involved in a serious sin, and the priest tells them that they must repent and cease from that sin, or else he will have to deny them communion, this is not mere advice, and the individual has no right to ignore what they are told.

It is not inappropriate for a laymen to have a monastic as his spiritual father, but this should also be approached with caution. Sometimes such monastics try to impose a monastic style of obedience, and this has often had disastrous results.

The clergy of our diocese issued (with the blessing of Archbishop Peter) a statement on this issue in 2009:

“As part of our pastoral discussions we talked about the need for parishioners to confess as a rule to their own parish priests, and only with a specific blessing to confess to other priests. This is especially important given the propensity for some clerics outside the Russian Church to employ the canons as a cold rule of law rather than as a pastoral guideline applied with love. This has led in some instances to parishioners being given lengthy penances of excommunication for sins that have been confessed previously with little or no penance from their own parish priest. Further, we strongly call upon our flock to confess on Saturday evenings or eves of feasts, and only to confess on Sunday mornings or feast days before the Divine Liturgy in extreme circumstances.”

And so if a parishioner wishes to have a spiritual father other than their parish priest, they should get a blessing to do so, and this is for their own protection.

For more information on this subject, I would recommend Metropolitan Anthony (Khapovitsky)’s book on Confession, which we have in the bookstore, and which also available online.