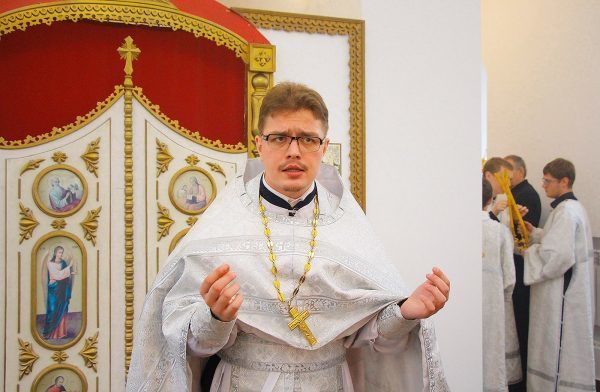 Personally, telling people something that they do not want to hear is the hardest thing to do in the ministry. Especially when a person feels like they are doing everything right and strengthens the conviction with “the thousands of years of the Holy Fathers’ experience” read out from an inexpensive pamphlet like “How to Find Salvation in the Modern World”.

With consent of the participant, I will tell a story, which I was a part of 6 or 7 years ago.

A teen named N, aged 12 or so, was helping around the church I served at. At some point, I started to notice that he, the Sunday school graduate and mother’s joy, was clearly losing interest in the Church. He took every opportunity during the service to escape to the sacristy, where he turned on the phone, and then he was lost to the world. After the service he immediately left having impatiently waited for its end fidgeting from foot to foot. I can perfectly understand such behavior: the liturgy is long, and you can get a lot done in these two hours when you are twelve-fourteen years old. It is a pity to spend that time on something that is perceived as a monotonous and boring chant.

When I approached N to talk, he obviously felt shy and laughed it off, “Father, everything is alright, everything is fine”. Of course, I got no change out of him. Then I decided to talk to his mother. I did not expect anything good to come out of this talk: it was clear that in her coordinate system her son was on the right track then and he should be kept there in every possible way. The conversation did not turn out to be long as I had planned it to be: I suggested that perhaps it would be better not to insist on N coming to the church every Sunday, and not to think that their interests and priorities would always be the same; that it was about time to give the child some freedom in the choice of leisure. The mother would not listen to a young priest like me: she had her own coordinate system, in which at that stage there should be a fight with all the hell’s forces for her son. Among the hell’s forces were a phone, a computer, and relative freedom. On the opposite side were church, school, and the free time spent on some good cause, development, and all good.

The end was predictable. I left that church a long time ago. N is already a student, and he has not come to church even on Pascha for several years. At some point the mother realized that the contact with the child was almost lost. However, by that time he could not be forced to do anything: he had his own ideas about how to spend Saturday evenings and Sunday mornings.

A couple of days ago we met on the street and I heard this story, “I criticized you back then, but now I see that maybe I should have given N more freedom”.

I have become less naïve over the past years and I know that most people are ready to have their thoughts only reaffirmed by anyone: a friend, a spouse, a priest, or a psychologist. I know that family, church, and staff members generally see things in their own perspective and if someone tries to sway their opinion, they are more persistent in defending their holy things.

Unfortunately, over the years each of us loses the best ability: the ability to learn. For the most important thing in learning is to see and correct our mistakes. By the age of thirty or forty far too many people become more infallible than the Roman pontiff. For it is hard to live differently: one wants at least some kind of stability and solidity. If it is absent in the outside world, it is necessary to create it inside oneself becoming a moralist who is always right.

Priest Denis Kostomarov gives newcomers six tips. Almost every day I come across stories of how a prolonged…