How often we hear from faithful people how sad it is to part with Pascha. Many say that it is sad because the Lord was with us during these bright Paschal days, but now He will leave us. Yes, of course, the triumphant days of Pascha have gone silent and ended.
Metropolitan Philaret of Eastern American and New York (+1985) | 25 May 2012 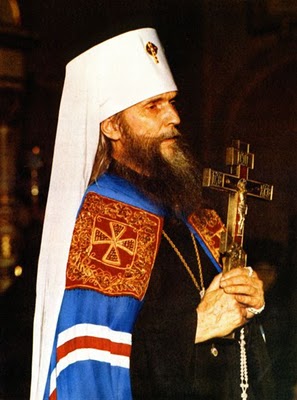 How often we hear from faithful people how sad it is to part with Pascha. Many say that it is sad because the Lord was with us during these bright Paschal days, but now will leave us. Yes, of course, the triumphant days of Pascha have gone silent and ended. But we should remember one of the hymns that was repeated with particular frequency during the bright Paschal days: “Let us who have beheld the Resurrection of Christ worship our holy Lord Jesus” – and we have just heard this, at this Vigil for another feast, the feast of the Lord’s Ascension. This hymn demonstrates the very close relationship between two triumphs: the triumph of Pascha and the triumph of the Lord’s Ascension.

One and the same Lord Jesus Christ, Whom we praised in the Paschal night, ascends to heaven in glory, for which reason our spiritual joy should follow Him thereto rather than become saddened. It might seem that we should grieve, as did the Apostles. But we heard in our hymns that were sung during the Vigil that the Lord “filled with unutterable joy in His Ascension” His disciples and His Divine Mother. Recall that the Lord’s Ascension and enthronement at the right hand of God the Father completed the immediate work laid upon Him, which He accomplished “for us men and our salvation.”

At the dawn of human history, man dreamed of becoming equal to God, but he did not become at all equal to Him or become God. He went from being pure, innocent, and holy to becoming an indecent sinner and a “seal of wrath,” as the Scriptures say. But the Lord did not abandon His creation. Man wanted to become God, but he did not become Him; but God did become man, without ceasing to be God, and revealed Himself on earth as the God-Man. He so took upon Himself our human nature that now, in all of boundless eternity, there will not be another Son of God apart from the God-Man, our Lord Jesus Christ, Who in His boundless Divine Essence was well pleased to take upon Himself our human essence, our human nature. God descended from heaven to earth as God and ascended into heaven as the God-Man: that is, He not only redeemed, cleansed from sin, and sanctified our human nature, but enthroned it at the right hand of God the Father. Now – higher than all creation, higher than the Angels, Archangels, Cherubim, and Seraphim – He Who is God and at the same time Man, like us in all things, is enthroned upon the Divine Throne.

Only the wisdom of God, the infinite love of God, the grace of God, and His wisdom and power could have accomplished this difficult deed. Recall therefore that when we glorify the Lord Savior, Who has ascended and sits at the right hand of God, we are also glorifying in Him our human nature. But this is not enough, He is more than just with us. In the Apocalypse we read that the Lord says: To him that overcometh will I grant to sit with Me in My throne, even as I also overcame, and am set down with my Father in His throne (Revelation 3:21). It is frightening even to dream of this, but these are the words of the Savior, Who never spoke an untruth and never spoke an exaggeration: if this is what He said, then this is how it will be – it cannot be otherwise.

Therefore, we rejoice not only for Him – that He ascended to the right hand of His beloved Father – but also rejoice that our human nature has not only been cleansed and sanctified, but has ascended to the heights of heaven. Therefore, the feast of the Lord’s Ascension should not be a day of sorrow, but one of eternal rejoicing in spiritual triumph. Amen.