Pascha Under a Rain of Bullets

Archpriest Zechariah Kerstiuk of the Department for External Church Relations of the Ukrainian Orthodox Church (Moscow Patriarchate) talks about the situation in Libya and how the Paschal service was celebrated in this closed country. 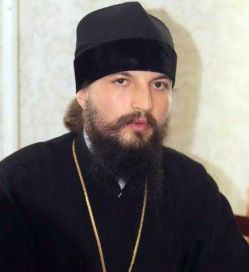 In Libya there is chaos and anarchy. The talk of stabilization shown on television does not correspond to reality. There is no stable authority. There are not even police on the streets. Today the country is already officially divided into three parts. Each city has its own authority…

The country is falling apart. In some regions there are concrete combat operations using heavy artillery.

In Tripoli the situation appears relatively calm by day, but there are exchanges of fire at night. One is woken up ten to twenty times. One can never get used to the sound of gunfire.

Life in a country that not so long ago was actively developing – with a normal structure for the social support of the population, with various subsidies and payments – has been practically paralyzed. Many government offices have been bombed by NATO.

Everyone lives for himself, everyone tries to protect himself, and everyone is armed. It is no rarity to see young children on the streets with sub-machine guns.

Tripoli is controlled by several groups that keep up the appearance of a ceasefire among them. But what will happen later, when they begin to divide their sphere of influence? The prognosis is discomforting. 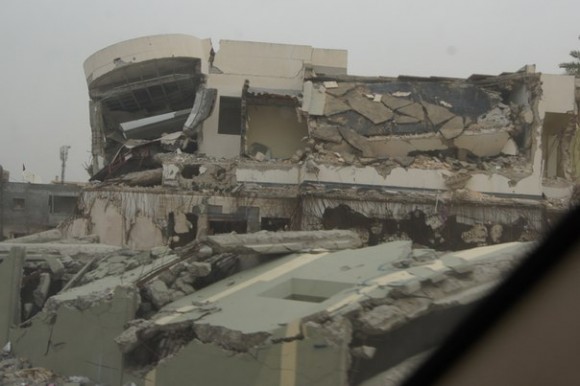 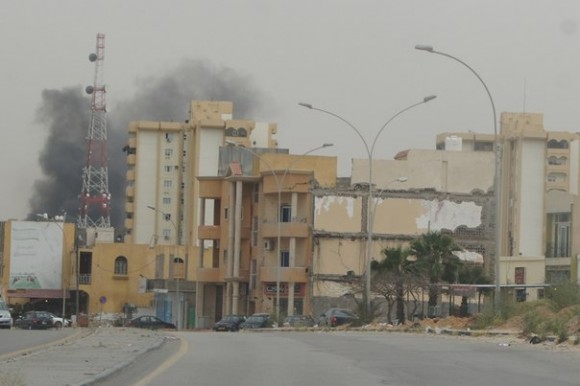 It took half a year’s work to realize the possibility of travelling to Libya in order to visit our compatriots living there. Many people came to Libya to work and, when the war started, were no longer able to leave.

The Lord allowed it, and a visa was obtained through people in the UN. Having arrived in the country, my first point of business was to establish contacts with our compatriots and to seek permission to celebrate the Paschal service. Receiving permission seemed unlikely. But, by God’s mercy, permission was granted. 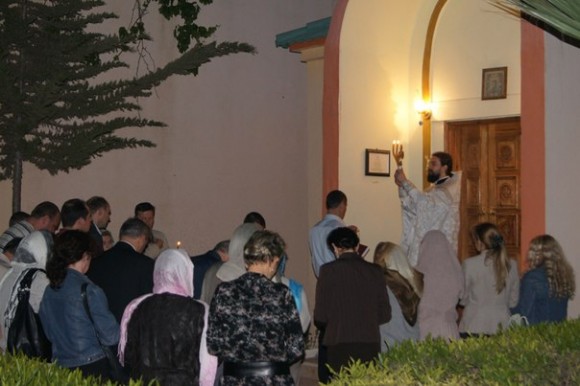 There were very many people at the nocturnal Paschal service, including young children – they were not sent away during the evacuation. 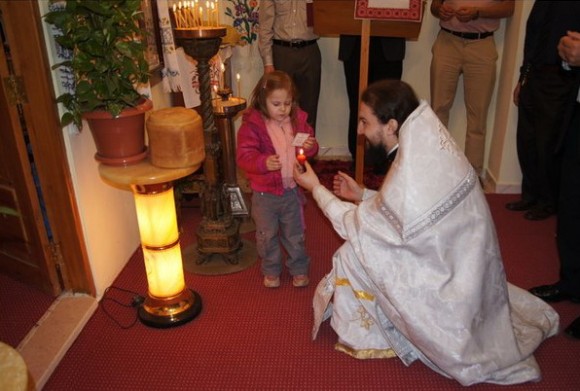 At the nocturnal Paschal service and the later Liturgy more than 200 people came, the majority of whom (90%) were medics and, to a lesser degree, diplomats. 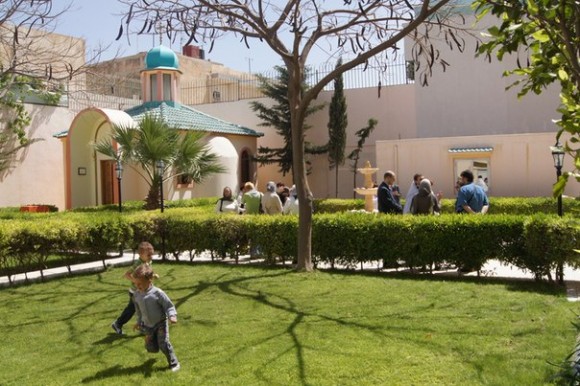 During the war medics were treated very well; they had protection. Therefore they did not leave. Many related that in an entire hospital there might be only one surgeon – a Ukrainian. Up to forty operations a day would have to be performed. But of course it is obvious that people did not come here for a better life.

The Libyans were busy with their revolution. Many people perished here: according to unofficial data, approximately 500,000 people were killed and around 300,000 were injured. According to the official data provided by NATO, there were 170,000 fatalities. This means that the truth is somewhere in the middle. But for a country of 4,000,000, even 170,000 is a very large figure. 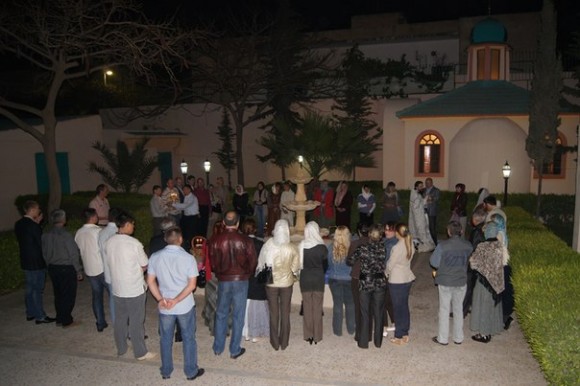 We served the nocturnal Paschal Liturgy under the whistle of bullets, machine-gun fire, and explosions. The city is mined, and it is not uncommon for cars to hit landmines. The airport is also mined. 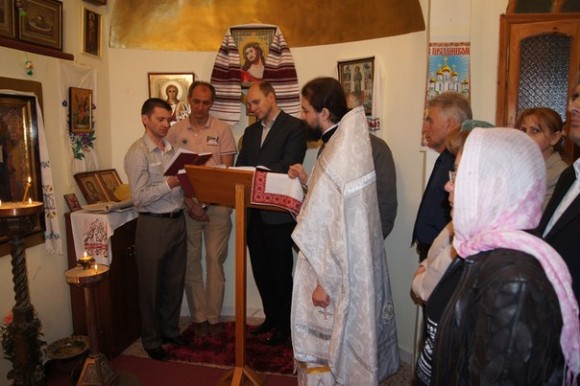 At the service we read the Gospel in ten languages: Belorussian, Ukrainian, Church Slavonic, Arabic, English, German, French, Spanish (there was a Spaniard at the service), and Serbian (Serbs also took part in the service). 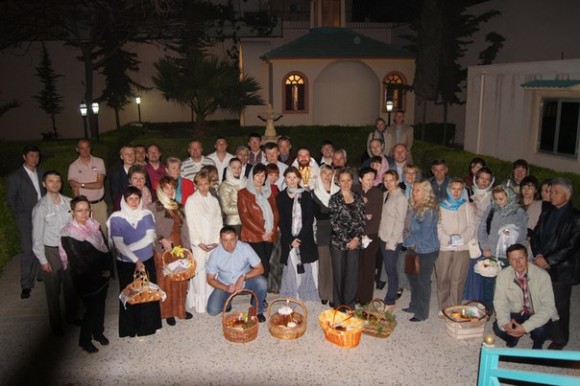 We brought crosses and prayer books for the people, all of which were distributed by the first day of arrival. 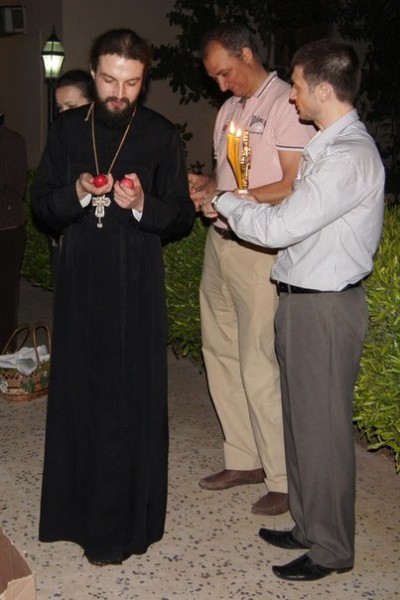 But not everyone was able to come to the Paschal service, and therefore I myself am travelling around the cities – I have already visited five. People gather (they live on the territory of clinics and hospitals) around the table. First we serve either Vespers or the Paschal Liturgy. Then we talk and sing songs in Ukrainian and Russian. 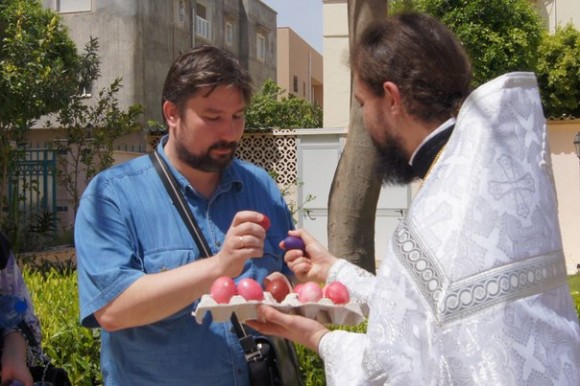 In addition, we negotiated for a very long time for permission to visit our compatriots in captivity. This also seemed nearly impossible. Among the captives are two Russians, three Belarusians, and more than twenty Ukrainians. 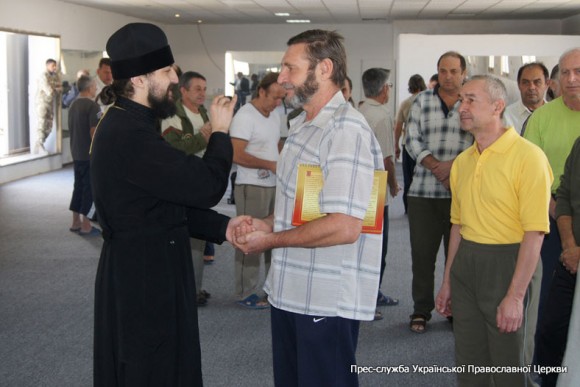 The captives appear to be without any bodily injuries, but they of course have tired-looking eyes: eight months of captivity makes itself known. But they are holding on and look to be in good spirits. I distributed icons, prayer books, cheese pascha, and colored eggs among them. 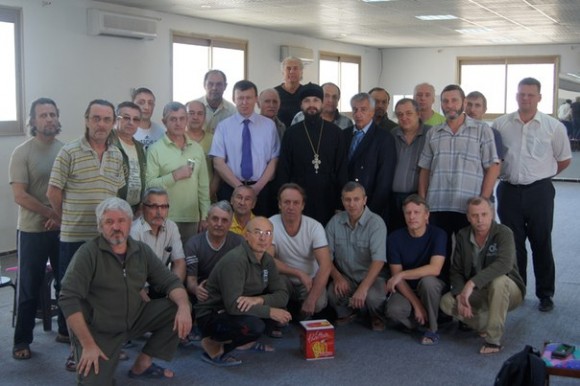 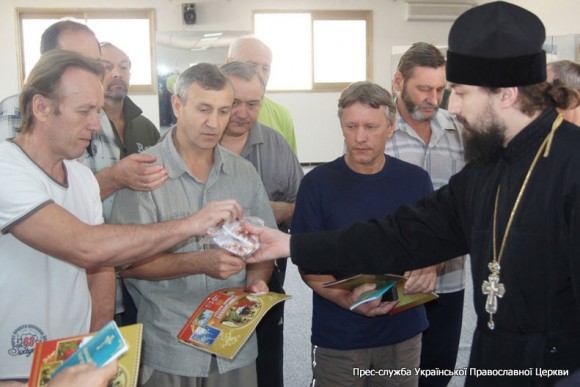 I even gave an Easter egg to the leader, who smiled at this and later said: “We congratulate you on Christ’s Pascha!” 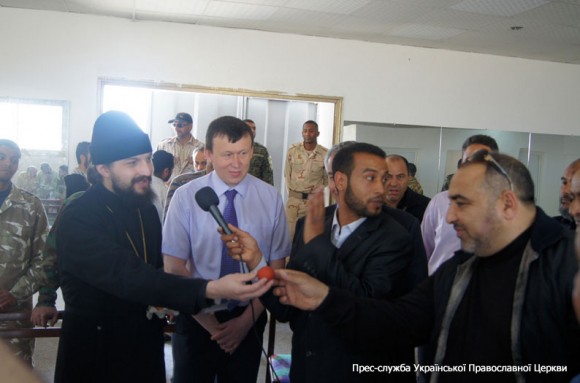 By my own initiative I categorically do not communicate with the local population. This can be interpreted as religious propaganda, for which there is the death penalty here.