Paschal Letter of His Beatitude John X, Greek Orthodox Patriarch of Antioch and All the East

Source: Eastern Christian Insights
Christianity offered the world many values and numerous concepts. It offered and is still offering a lot of ideas through its theology, and we would rather reflect them in our reality. The Christian writings could not find a better expression to tell about its Master, Jesus Christ, rather than “The Word”.
Natalya Mihailova | 22 April 2014 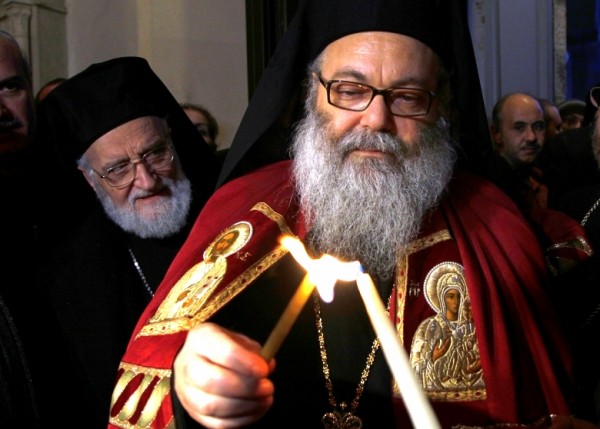 Christ is risen! He is risen indeed!

“In the beginning was the Word, and the Word was with God” this is what the Evangelist John said. This Word is Jesus Christ who visited humanity holding the letter of love and He “dwelt among us” or, literally speaking, as mentioned in Greek “pitched His tent among us” in order to make us citizens of heaven.

We witness for it through love, as love summarizes all virtues. We witness for it when we contemplate through the path of Resurrection, sipping from it the nectar that guides our life. Godly love is the love that inaugurated the path of our resurrection when it showed us our Lord descending to our humbleness, lying in a manger for our salvation. It is the same love that brought Him to our lands, though He is the source of love, and it is capable to bring Him into our hearts. It is the Godly love that sent Him to us to walk the path of the Cross, penetrating through the darkness of the tomb, the darkness of the souls that were suffering under the burden of sin, rendering the thirsty souls the sources of salvation through the power of love.

Christianity offered the world many values and numerous concepts. It offered and is still offering a lot of ideas through its theology, and we would rather reflect them in our reality. The Christian writings could not find a better expression to tell about its Master, Jesus Christ, rather than “The Word”.

” Jesus is The Word, He is the logic of love. He was sent to tell us that humanity is called upon, through the logic of love, to knit the texture of its love addressed toward its Creator. ”

The message of the sons of Resurrection is the message of The loving Word, in front of whom, the logic of power, violence and extremism disappears. Their message is the logic of the loving convergence, without hiding behind other egos.

But this does not mean that the message of the Resurrection’s sons cannot make a distinction between love and complacency. Their message is a word that distinguishes between submission to the voice of love and forgiveness, and submission to the logic of surrendering.

” We are used to the voice of submission to the logic of dialogue and peace, but we refuse the submission to the logic of terrorism, extremism and declaring the others disbelievers. We are a word against the logic of conflict, but this does not mean that we are a word of submission in front of those who transgress our human and our sanctities. No matter how harsh time is, we are planted in our land, from its earth we implant the seeds of belief in God and Homeland in the souls of our sons. We are in it as spikes of wheat that sway with wings, but resist by the power of this who is powerful through love.”

The Authenticity of the term “word” in Arabic is guaranteed by the origin of this word. It comes from a verb that means “to make a positive effect in listener’s mind”. So, everyone is called upon not just to through his words in the winds, but to become a voice of truth that makes an effect in the hearts and minds of his brothers.

As our arm is the honest word, so we have to say it. Salvation of Syria comes through the logic of word and dialogue that preserves its sovereignty and the unity of its land. The anchor of its salvation is a word of conciliation, a word of truth against the logic of violence, extremism and terrorism. Syria’s resurrection will be through the civil state that opens its arms for everyone under its roof. It is our right to live secure in Syria, and it is our right and the international community’s responsibility to dry the sources of arms that displaced our sons from our country.

The logic of the word and dialogue is the only one capable to save Lebanon as well on the base of citizenship and coexistence. The whole political class in Lebanon is called upon to rise the country’s interests at the expense of its own interests. Lebanon has lived an experience that may remind all of us that the tax of wars and conflicts is more expensive than the tax of rapprochement and dialogue. This dialogue that preserves Lebanon as the heart of a stable East, holding the East as a guarantee for a safe world.

O God! Give us the spirit of your peace, bless our sons everywhere, be with those displaced, heal the wounds of our human, bestow peace upon us and upon your world, compass the souls of the reposed with the abundance of your mercy, reinforce and give us the power to console them that mourn, enlighten our eyes to see the light of your glorified Resurrection as a beginning of our countries’ resurrection, so we may chant both in mouth and heart:

“Christ is risen from the dead, Trampling down death by death, And upon those in the tombs Bestowing life!”

Issued from the Patriarchal Residency- Damascus