Source: DECR
Natalya Mihailova | 22 April 2015
April 20, 2015 – A grand Paschal reception took place at the Ministry of Foreign Affairs House of Reception. It was attended by the Primate of the Russian Orthodox Church, His Holiness Patriarch Kirill of Moscow and All Russia, and Russian Federation Minister of Foreign Affairs Sergey V. Lavrov. 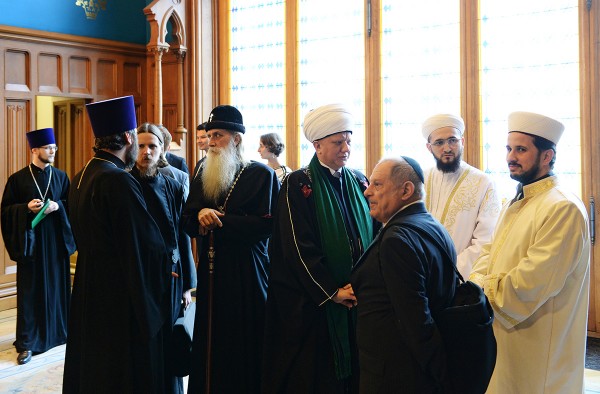 Welcoming the guests, Mr. Lavrov said in particular, ‘From times of old, the Russian Orthodox Church has helped to define the moral guidelines for our society, assisting the Russian people in coping with large-scale fateful challenges. And today too, faithful to her lofty vocation, the Church makes a priceless contribution to the maintaining of national accord, the task of spiritual regeneration of Russia and the education of youth for traditional values’. 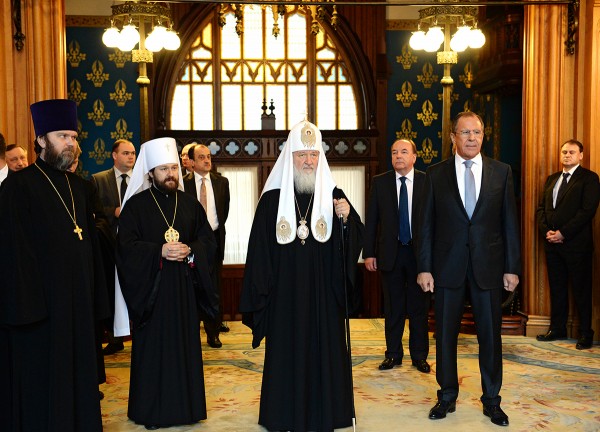 These selfless efforts of the Russian Orthodox Church, he said, is especially relevant in our complicated time when the world has come to a dangerous line as competition has increased in all its manifestation, the level of proneness to conflict has risen, and elements of chaos and instability have accumulated in international relations. The harmfulness of this course has been fully manifested in the tragic events in Ukraine. ‘The appeal of the Russian Orthodox Church to sense, her tireless efforts to help establish peace in Ukraine and stop the fratricidal conflict in that country deserve the profoundest appreciation’, he said.

He also spoke of the serious situation in the Middle East and North Africa, stating that ‘the Christian population there suffers most of all. In a search for protection many of them look to Russia. He pledged to further broaden cooperation with the Russian Orthodox Church and other traditional confessions in Russia in the interests of improving international relations and strengthening their moral foundation.

In his speech Patriarch Kirill addressed the situation in Ukraine too, saying, ‘The Paschal days give strength to our hope that the trials in Ukraine will end in a lasting peace. Nevertheless, the Ukrainian crisis and the desire of certain political forces to give it a confessional dimension is a challenge to the very historical unity of the Russian Orthodox Church… It is only by remaining above the political conflict that the Ukrainian Orthodox Church of the Moscow Patriarchate will manage to preserve its spiritual unity and exceptional peacemaking potential. The attempts to win the Church over to one of the conflicting sides may lead the Ukrainian society to an even deeper division’.

Speaking about the inter-Orthodox relations, Patriarch Kirill commended the work to normalize the status of the Chinese Autonomous Orthodox Church, to broaden the presence of the Russian Orthodox Church in the Asian and Pacific region, to strengthen ROC parishes abroad.

His Holiness drew the guests’ special attention to the catastrophic situation of Christians in the Middle East, saying, ‘We give a high value to the efforts of the Russian Federation and the Ministry of Foreign Affairs in that region and believe it is necessary to broaden the ‘front’ of protection of Christians in the Middle East and throughout the world’. In this respect, he gave a positive assessment to the prospects of cooperation with the Roman Catholic Church as the two Churches share the stand on the need to preserve the Christian presence in the Middle East and North Africa. His Holiness spoke in detail about the atrocities committed by ISIS in Mosul. He expressed the need to develop dialogue with Islam and the Arab world in order to prevent the strengthening of the extremist wing in the Islamic community and to remove the distorted understanding of Islam in the world public consciousness.

Another topic in the patriarchal speech concerned the inter-confessional relations. ‘I should say that the difficult relations between Russia and western countries have affected inter-Christian contacts. ‘I remember our work with churches in the USA and Western Europe during the Cold War. The relations at that time were much more tense and dramatic… But at the same time, Christians managed to establish and develop multifaceted relations with their brothers and sisters in other countries. I believe the not so positive a context today may create conditions for intensifying our dialogues with representatives of both the Catholic Church and the Protestant world’.

In the course of the event, Patriarch Kirill presented Mr. Lavrov with the high church decoration, the Order of St. Sergius, in recognition of his fruitful fork for strengthening peace and friendship among nations and on the occasion of his 65th birthday.