Source: OCA
Natalya Mihailova | 03 May 2015
Representatives from every diocese of the Orthodox Church in America, Chancery clergy, members of the Department of Pastoral Life, and an advisory panel gathered at the Chancery here April 28-29, 2015 for a Pastoral Life Colloquium to discuss issues facing clergy and their families. 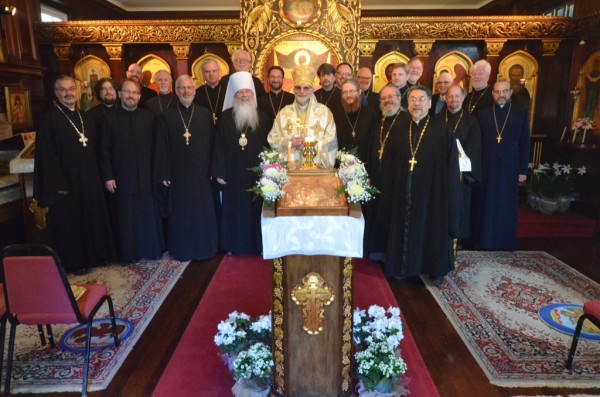 “Collectively, participants brought decades—and even centuries—of pastoral experience to the Colloquium,” said Priest Nathan Preston, Administrator of the recently revived Department of Pastoral Life and Ministry.  “They spent the time in conversation, working together to know, name, and understand both the failures and strengths they have experienced.  Despite the more than 20 participants, it was an intimate gathering that elicited frankness and sometimes blunt honesty from the participants.”

On April 29, participants attended the Divine Liturgy, celebrated by His Eminence, Archbishop Mark of Philadelphia and Eastern Pennsylvania and Episcopal Liaison for the Department of Pastoral Life and Ministry.  In his homily, he noted the necessity for priests to maintain healthy relationships that challenge them to grow as individuals and servants throughout their years of ministry. Without these, he emphasized, the threat of isolation, stagnation, and bitterness towards community, family, or self is very real and dangerous.

After breakfast, His Beatitude, Metropolitan Tikhon, outlined his aspirations for the Department and for the day. Metropoliltan Tikhon, who recently noted that clergy health was one of his three most important commitments, made it clear that “health” is not limited to the spiritual.

“His Beatitude stated that we are integrated beings of body and soul, mind and matter, and that as integrated individuals we act and exist within families, churches, and diverse communities,” said Father Nathan.  “This means that we must struggle to maintain the ascesis of balance in our choices.”

Archpriest Alexander Garklavs, Rector of Holy Trinity Church, Parma, OH, and Dr. Albert Rossi, Director of Field Education at Saint Vladimir’s Seminary, Yonkers, NY, offered a brief presentation during which they outlined the Department’s previous attempts to address these matters and discerned what have been—and continue to be—the scope and nature of these chronic needs.

“The remainder of the day was spent in intense and, at times, far-ranging discussion, the formal topics for which were drawn from a survey completed in advance by the participants,” said Father Nathan.  “These included, but were not limited to, such things as evaluating and promoting a Church culture that values honesty in communication, discerning that fine and often shifting line between self sacrifice and self or familial neglect, noting and appreciating those experiences in which failure had been the best of teachers, and reflecting on those markers or symptoms that experience has shown to be early indicators of potential problems for those engaged in parish ministry.

“Most notable among the topics addressed were clergy isolation and the need for and often lack of well tended relationships infused with trust,” Father Nathan continued.  “In both small and large group settings, each priest added his attestation gleaned from his experiences or borrowed from the anecdotes and hopes of his diocesan brothers, whom he represented. Over the course of the day, the true diversity of the Orthodox Church in America was made real in the sharing of stories and observations, and though a tremendous diversity of parishes, priests and places exists, there is a uniformity, a ‘catholicity,’ to many of our problems.”

After the celebration of Vespers, Archpriest Ian Pac-Urar, Rector of the Presentation of Our Lord Church, Fairlawn, OH and Director of the OCA’s Department of Continuing Education, and Archpriest Dr. Steven Voytovich, Dean of Saint Tikhon’s Seminary, addressed the participants.

“Fathers Ian and Steven asked the participants to discern what they hoped to take home as a result of the Colloquium, what paths might be pursued with regard to implementation on the personal and corporate levels, and what steps should be taken to ensure that the day’s work would be realized, met and lived,” Father Nathan added.  “Archbishop Mark further challenged those in attendance to ask themselves why they were there that day. If they had come only to fulfill an obligation or out of obedience to their hierarchs’ instructions or merely to make a point but nothing more, rather than out of a commitment to serve and work at making the lives and ministry of pastors, their families, and their communities better, he asked them to step aside and, with their bishops, help to find someone else who was so committed. No one left!”