Patriarch Bartholomew prays for end to bloodshed at Sümela service

Source: Today's Zaman
Natalya Mihailova | 16 August 2015
The Divine Liturgy, marking the Dormition of the Theotokos, was held at the historic Sümela Monastery in the northern province of Trabzon on Saturday, with Greek Orthodox Ecumenical Patriarch Bartholomew I praying for an end to the recent violence in the country. 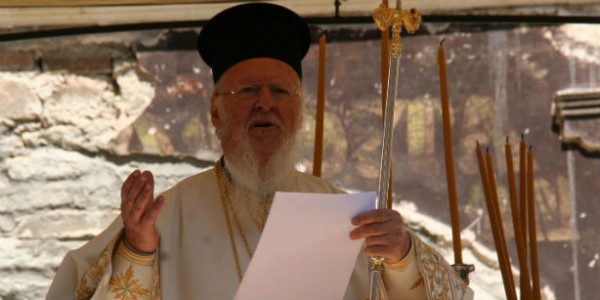 “It is our biggest and primary wish that no more blood is shed, no more young people die and no more mothers, fathers, spouses and children come to grief,” Bartholomew said following the service.

Violence has dramatically escalated in Turkey over the past weeks. Turkey launched strikes against Islamic State in Iraq and the Levant (ISIL) targets in Syria and terrorist Kurdistan Workers’ Party (PKK) targets in Turkey and northern Iraq as part of what it calls a two-pronged war against the terrorist groups. Dozens of troops and police officers were killed in the recent violence.

The violence has effectively shelved a settlement process that got under way in 2012 and an accompanying cease-fire.

This is the sixth time that a religious service has been held at the Sümela Monastery in the history of the Turkish Republic.

Since 2010, the government has allowed a church service to be held there once a year in a gradual loosening of restrictions on religious expression. The service was officiated by Patriarch Bartholomew I — as in the past five years.