Patriarch calls to prevent ‘any attempt’ to legalize same-sex marriage

The head of the Russian Orthodox Church has asked for a state-level ban on legal moves to allow same-sex marriage, noting that this position was based on the very nature of Christianity. 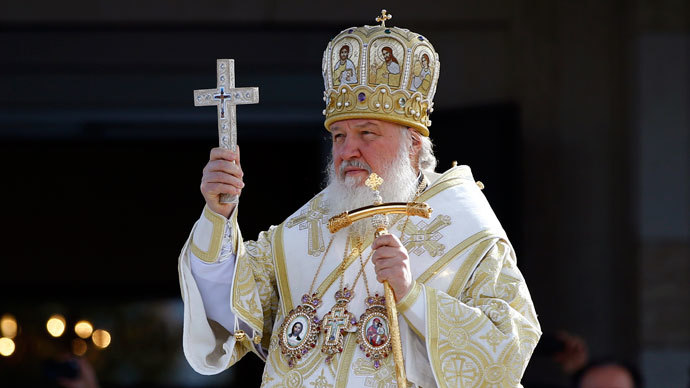 Speaking before upper house members, Patriarch Kirill said that the move would protect the family as a public institution.

“In a response to the broad international discussion of this issue we would like to make a resolute statement – marriage is a union between a man and a woman, based on love and mutual understanding and made in order to give birth to children,” Russia’s head cleric stated.

Patriarch Kirill promised that the church would provide support to all state and public institutions that seek to protect the traditional Christian values. He stressed, however, that such a move was not caused by a desire to influence politics, rather by the very nature of Christianity.

When the state adjusts its every move in accordance with the “natural moral norms” it does not become religious, but instead turns into a “reasonable guardian of the common good.”

In addition the Patriarch noted that wider promotion of religious education could help the authorities tackle extremism and terrorism. Prepared citizens could offer ‘intellectual resistance’ both to Islamist extremists and to mass culture with its cult of hedonism and aggression, he added.

He also noted that simple urges for friendship and peaceful coexistence were not enough and that the correct attitude to other religions can only be based on one’s own religious obligations.

The Russian Orthodox Church has never accepted same-sex marriage, but statements from its representatives have become especially harsh as gay-related topics reached the top of the public agenda in the country.

This happened after last year’s adoption of the federal law banning the promotion of homosexual relations to minors. The law has faced immense criticism in Russia and abroad, however its sponsors and the Russian authorities argued that the legislation is not discriminatory and was only introduced in order to protect the children.

As the discussion heated up, the head of the Holy Synod’s department for relations between the Church and the Society suggested a nationwide referendum on introducing criminal responsibility for homosexuals (something that was abolished in Russia in 1993, soon after the collapse of the Soviet Union).

The cleric’s idea has not yet materialized. Moreover, President Vladimir Putin played it down in a recent TV interview stressing that Russia was a secular state and such initiatives were unlikely to gain any momentum.