PRAVMIR. June 13, 2012. In a meeting with religious leaders from Finland – representing the Finish Autonomous Orthodox Church, the Evangelical Lutheran Church in Finland, and the Roman Catholic Church – Patriarch Kirill of Moscow and All Russia condemned the practice of blessing same-sex unions, as is done by the Lutheran Church of that country. 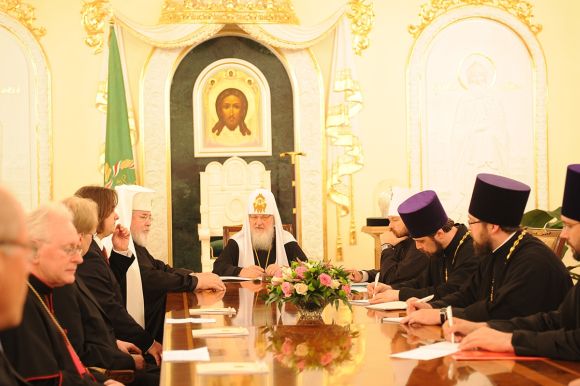 According to the Patriarch’s press service, His Holiness emphasized that the Orthodox Church strictly adheres to the moral teachings found in Scripture. When someone repents of sin during Confession, the Church, following the Savior’s commandment, will forgive him until seventy times seven (Matthew 18:22). But forgiving the sin does not mean justifying it: the Church is required to awaken the penitent’s conscience and not to justify his sin. Homosexual relations are sinful by nature and, therefore, the Church cannot bless them.

The Patriarch continued: “By justifying sin, the Christian community losses its own identity. The Church’s authority cannot be used for justifying sin; it is called to witness with a prophetic voice to God’s Truth. In today’s world there are powers that want the Church to act in accordance with political correctness. But we should take the path of witnessing to Christian truth to the very end, as did our fathers in the difficult times after the revolution, when the Communist authorities offered them to join the so-called ‘Red Church’ in exchange for their lives. Some accepted it, but the vast majority of people did not. Thousands of martyrs and confessors of the faith chose the terrible path of suffering.”

As a result of this discussion, it was stated that the Evangelical Lutheran Church would need to clarify its position in this regard for dialogue to continue.