Source: Basilica.ro
In his annual message occasioned by the Sunday of the Myrrhbearers, His Beatitude Patriarch Daniel expressed his gratitude to Christian women for being ‘models of faith and courage in times of trial.’
Aurelian Iftimiu | 01 May 2020 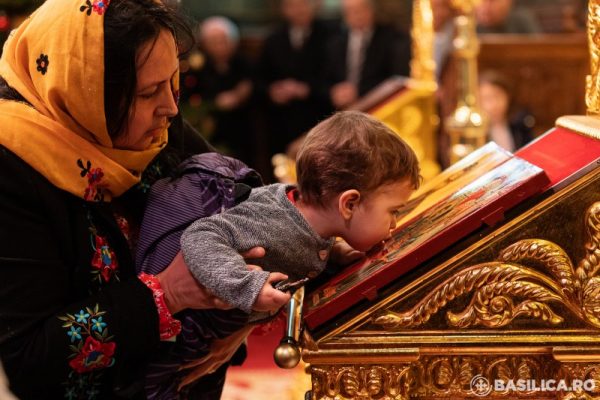 The message that will be read throughout the Romanian Patriarchate this Sunday reminds of the presence of the myrrh-bearing women at Christ’s tomb as an act of great bravery and witness. Since their love was greater than fear, the Myrrhbearers proved to be more devoted to the Lord than the apostles.

On this occasion, the Patriarch of Romania thanked and blessed all Christian women, who show the same sacrifice and courage in their families and in society, by educating children and caring for the elderly.

The Myrrh-bearing Women – models of faith and courage in times of trial: full text

On the third Sunday after Easter, also called the Sunday of the Myrrhbearers, the Orthodox Church commemorates and honours the Holy Myrrh-bearing Women, who came to the tomb of the Saviour Jesus Christ with precious myrrh, receiving from the angels, before all, the news that Christ had risen from the dead.

These myrrh-bearing women became bold confessors of the Lord’s Resurrection, becoming worthy of the great joy of meeting the Risen Christ Himself (Matthew 28: 9).

From the New Testament, we know the names of the myrrh-bearing women: Mary Magdalene, Mary the mother of Jacob and Joseph or Josiah, Mary of Cleopas, Joanna the wife of Chuza, the steward of King Herod, Salome and Susanna, who helped the Saviour and the Holy Apostles in the holy work of preaching the gospel. To these are added Martha and Mary, the sisters of Lazarus of Bethany.

The presence of the myrrh-bearing women at the tomb of the Lord is an act of great courage and responsible acceptance to profess the faith, in that their love for Christ the Lord was stronger than the fear produced by those who decided His crucifixion.

Through their faithfulness and godliness, the myrrh-bearing women proved more courageous and devoted to the Lord Jesus Christ than His disciples, becoming “apostles to the Apostles,” as St. John Chrysostom called them.

In the context of the year 2020, proclaimed in the Romanian Patriarchate as Solemn Year of the pastoral care of parents and children, we remember with gratitude our mothers and grandmothers, female educators, teachers and professors of religion who instilled in children and young people the faith in the crucified and risen Christ, forming them as believers in the Romanian Orthodox Church and the Romanian people.

Permanently industrious in family life, helping their spouses and parents, raising children in the faith, or praying and working in monasteries, hospitals, and other institutions, godly and brave Christian women have been witnesses to the faith at all times.

That is why the names of many Christian women have been inscribed in the church calendar, being bright and prayerful portraits for the whole Church.

Even today, pious and hardworking Christian women in our country cultivate merciful love for suffering people in hospitals and social care institutions. They support the religious education of children, but mainly, as mothers and wives, they bring holy peace and joy to families and society.

In particular, we appreciate the sacrifice of Christian women who are medical personnel (doctors, nurses) and work skillfully and sacrificially to treat and heal those affected by the current pandemic.

On the occasion of the Sunday of the Myrrh-bearing Women, we address thanks and blessings to all Christian women for their entire work done for the welfare of the Romanian people, and we wish them all good health and help in life, peace and holy joy, for many and blessed years!