Source: Orthodox Life (Russian)
Through the Christian upbringing of children, faith gets passed on to each succeeding generation.
Pravmir.com team | 29 July 2019 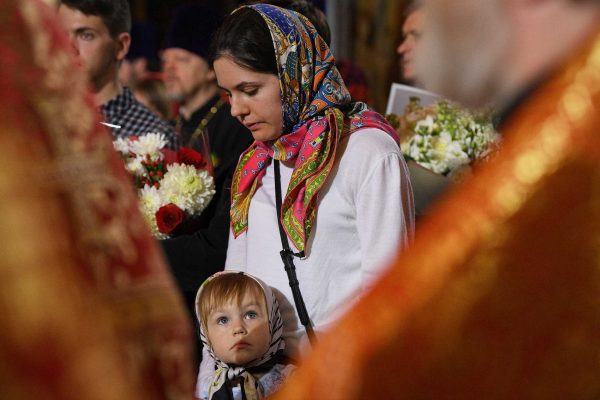 Both in the recent godless time and to a large extent today, Orthodox Christian women play a crucial role in the Christianization of society. His Holiness, Patriarch Kirill of Moscow and All Russia spoke about this in his sermon on the feast day of the Holy Equal-to-the-Apostles Princess Olga on July 24, 2019.

“Children receive their first teaching on faith from their mothers and grandmothers. Although, grandmothers often have little power to influence the life of a young family, they put so much effort: by setting a sincere example, through love and piety. It is done in order to bring Christian ideals, Christian foundations closer to the hearts and minds of infants and children”, said the Primate of the Russian Orthodox Church.

The Patriarch compared the “quiet” service of ordinary faithful women to the life deed of the Holy Blessed Princess Olga and encouraged them “to never quit their equal-to-the-Apostles service, to perform the Christian upbringing of their children and grandchildren, through whom the Orthodox Church and Christian faith is reproduced in each subsequent generation”.

“I especially appeal to out Christian women: to presbyteras, mothers, grandmothers, and all those, who have something to do with children’s upbringing. I encourage you to remember the remarkable example of Princess Olga and to pass on the greatest unshakable values of human existence imprinted in the Christian message to each subsequent generation of people, so that until the end of time the name of the All Holy Trinity is glorified and until the end of time faith in Christ, crucified and risen, the Savior of the world, remains in the hearts of people”, His Holiness, Patriarch Kirill stressed.