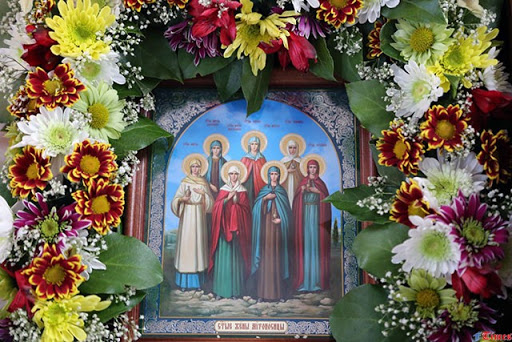 There is an old expression that says, a Crisis separates the Men from the Boys.

It’s certainly true that a crisis shows up everything that was previously hidden.

It shows people for what they really are.

It distinguishes people who have real virtues, from those who just pretend they do.

That’s one good thing about a crisis.

The Death of Christ on the Cross was just such a crisis.

And the Death and burial of the Lord Jesus Christ immediately divided the Lord’s disciples into two very different groups: it separated the Men from the Boys.

Only the Men (in this case) were mostly the women.

Saint John Chrysostom says that the great virtue of a man – of a male saint – is his courage.

This is a quality every male Christian must have, if he is to become holy… but we don’t often have it.

The monastic Church Fathers tell us that courage is also a quality every female saint – after she has started on all the female virtues – must also acquire.

Because to be a holy person – to be a saint – requires all the virtues.

Before a person can have love for someone, he has to have courage.

If we lack courage, we will quit. We will run away as soon as we are afraid.

That’s the reason Saint John Chrysostom says Saint Joseph of Arimathea had both love and courage when he went to Pontius Pilate, the governor, and begged for the Body of Jesus, until finally Pilate agreed to give it to him.

Brothers and sisters, Joseph of Arimathea was not making a simple request: he was exposing himself as a Christian, and quite possibly, setting himself up to be arrested by the Romans for being in the wrong place, and on the wrong side.

There was a good chance he would be executed, too.

But this was for love. This took courage.

His love did not stop there. The Scriptures tell us: he bought fine linen (about $1,000 in today’s money), and took the Lord to his own new tomb, hewn out of the stone (about $25,000 in today’s dollars). And as the Holy Friday Hymn tells us, he buried… A Stranger.

We have to remember that – Christ was a stranger to him.

Such courage. Such expense. Such love. Such faith. For A Stranger.

Yet the courage and the love we commemorate today on the Sunday of the Myrrhbearers is not primarily associated in the minds of most people with the memory of Saint Joseph of Arimathea.

It is associated with the group of holy women, whom Holy Tradition describes as showing manly courage – courage that, again, could have and should have gotten them arrested, and even killed.

Courage that all but one of the Apostles themselves lacked. (Remember: they ran away)

This is the great embarrassment this event represents – the visit to the Tomb of the Lord, not by the loyal Apostles – who should all have been there – but by the Myrrhbearing Women, who would have been excused if they had run away.

Ultimately, the Apostles would have to learn that lesson.

But on that day, their lack of courage to be where they should be, to be there to open the doors when the faithful women needed to enter to see the Lord, to put Christ the King before their fear of the power of Caesar… it brought their manhood crashing down.

It was the holy women who acquired the manly virtues that day.

It is the reason the Church remembers them as saints, evangelists, and equals-to-the-apostles.

In addition to the Mother of God, they include Mary Magdalene; Mary, the wife of Cleopas; Joanna, wife of Chouza; Salome, the mother of the sons of Zebedee; Mary and Martha, the sisters of Lazarus; Susanna, and others whose names are unknown to us.

Saint Augustine tells us that every morning, the rising of the sun at dawn has been hallowed by that one day, when the Myrrhbearers discovered the Resurrection of Christ.

The rising of the sun each morning has become a proclamation – again and again – that Christ is Risen from the Dead! Each day the same!

But one day each year – today – is set aside by the Church to remember that original day not for the Resurrection, but for those who discovered it: the Myrrhbearers, the Holy Women, Joseph of Arimathea and Nicodemus with him.

And we remember them, brothers and sisters, because the Holy Fathers do not ever want us to forget the courage it takes to be a Christian – every day – whether we live in the first century, or in the twenty-first century.

Whether it is the door of the Lord’s tomb that is closed, or the doors of our own churches.

We must have courage if we are to have love and faith.

A crisis will always separate those who have courage, from those who do not – whether outside the Church, or inside it.

Even the Apostles had to rediscover that, in order to find their way back to the Lord.

Let us have courage, then, like the Myrrhbearers. And let us pray for those who need to recover it.

Archpriest Geoffrey Korz is a parish priest in Hamilton, Canada.