Source: InSerbia
Natalya Mihailova | 06 January 2015
BELGRADE – Patriarch Irinej of the Serbian Orthodox Church (SPC) delivered a Christmas epistle calling on the Orthodox believers to pray for peace, love and unity to reign the world this year. 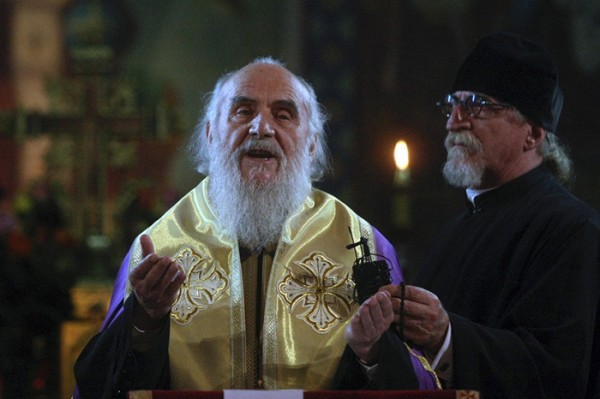 Ahead of Christmas, which is observed by Orthodox believers on January 7 according to the Gregorian calendar, the Serbian patriarch warned that “truly, man today is in danger of replacing God with Satan, with false divinity and false knowledge, true love with that which St. John the God-seer calls ‘the lust of the flesh, the lust of the eyes, and the pride of life’.” “And whenever mankind has followed that path in history, it has subsequently found itself at the entryway to its own catastrophe and before the fall of its own civilization,” the patriarch said.

“We pray to the New-Born Christ that in the upcoming year there will be less unrest but more peace, less hate but more love, less discord but more unity,” the patriarch said and pointed to the unity of the world and the indestructible unison of mankind.

The patriarch also warned that we are living in a time of use, but also misuse of God’s giving and gifts. “That misuse consequently causes a disruption of the basic order and rules of living, it is a cause of evil and many diseases, it endangers the health of both man and nature, and it leads to the loss of life’s meaning,” he said.

“In this, our time when everything is for sale – especially the sanctity of love and the meaning of life – the Divine Infant by His Nativity invites all people of all times to receive eternal divine love, immortal health and fullness of life, in communion with God the Father together with the Son and the Holy Spirit, One God glorified in Trinity,” Patriarch Irinej said and added that Christ’s Birth calls us to return to “those enduring moral values, to self-restraint, to chastity and discernment for the young, to holiness in marriage, to ascetic effort, fasting and prayer.”

In his Christmas epistle, Irinej said that the family is the basic cell of the Church of God and added that “when people deny and forget God’s love, then the family as its earthly realization and manifestation – that is, the community between male and female as the Holy Mystery of love and birth unto eternal life – falls apart.” “The human being is by nature and calling created for love. Just as a human organism has a need for healthy food, a man likewise, by losing true love and healthy food, replaces them with surrogates of love and food,” the patriarch said.

“On this Christmas as well we are with our brothers and sisters in Kosovo-Metohija, urging them to remain there and to live among their holy shrines,” he underscored.

“We prayerfully remember our brother and concelebrant, the Archbishop of Ohrid and Metropolitan of Skopje Jovan, unjustly sentenced and now serving that sentence only because he chose unity with the One, Holy, Catholic and Apostolic Church. We, likewise, remember all those who unjustly suffer and are being persecuted,” the patriarch noted.

In the epistle, Patriarch Irinej underscored that “the Nativity of our Lord is the day on which God became man, so that men could become gods by grace,” and he ended his Christmas note by the traditional Orthodox Christmas greeting “Peace from God – Christ is born! Indeed He is born! A blessed new year of Our Lord 2015!”